This time, Dave mentioned the last movement of 15.3 first: double-unders.  I rolled my eyes and was cussing myself for not being better at them by now. I was already disappointed with my score bec

ause I knew it would be incredibly low. Then he got to the second movement, wall-balls. It’s
official, he knows what I hate and he’s doing this to hurt my feelings. Then the last movement: muscle ups.

At this point, almost everyone in the CrossFit land, near and far, was probably kicking and screaming  over muscle-ups because it’s a more advanced movement and not many people have them. Me? Thrilled! Thrilled because if I can’t do a muscle up, I’ll have to scale and if I scale that means I get out of dubs! Yes! But how will muscle-ups be scaled? I gave it a few minutes and checked online for the scaled option. Lucky me, there wasn’t a scaled movement for it. The scaled WOD was just 50 wallballs (at a lighter weight, 10#) and a shit ton of singles (200)! This is something I can do, I feel good about this.

Wall-balls aren’t my favorite. I’m one of four people in the world who would rather give you burpees over wall-balls. But at least this is only 10 pounds. I had someone ask me, “What is a muscle up?” The only way I could accurately describe it was by telling them, “It’s a mythical creature, like the unicorn
of fitness. You don’t see them often, but when you do they are beautiful.”

On Friday I went in and helped judge a few people who did great, one RX and a couple scaled. Then just for shits and giggles I decided to try a muscle-up. I know I can’t do it, but I wondered how close I am . Or in my case, how far. Yep, I still have a ways to go. I can’t get my chest to the rings. 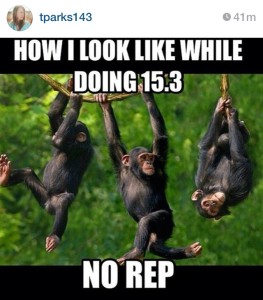 A few other ladies were there trying with me and I told them “It’s very advanced. I know I can’t do it, so I don’t even try.” How stupid did that just sound? How can I possibly get better if I never even try? Here’s a brilliant idea: try it every now and then. At least then I can get coached and hopefully see improvement, even if it slowly.

Saturday rolls around and I’m feeling pretty good about the WOD. I keep telling myself “It’s just a bunch of wallballs, the singles will be easy for you.”

The wall-balls aren’t bad at first and I was able to break them into sets of 10. Then I hit the rope and found one tiny spot on the wall to focus on, that’s what helps me when I’m working on the rope. I was able to do all 200 unbroken.

Back to the wall. I picked up the wall-ball and right off got a no rep. I threw it high enough but it didn’t touch the wall. Stupid rules. I broke the first two sets into tens and then sets of five from there. Suddenly, the 10 pound ball felt more like 20 pounds.

Back to the rope. I told myself to focus on the same tiny spot and just keep jumping. I asked Jeremy to let me know when I hit the 50 mark (50, 100, 150) because my legs were on fire and I wanted to hold out until at least 50 before I rested. Somehow I made it to 100, rested, and finished the rest. 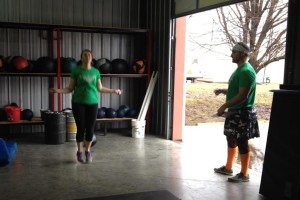 Back to the stupid wall-balls. Did someone switch my ball? When did we get 30-pound balls? Because that’s exactly what it felt like. I did two sets of seven, the rest fives and then whatever else was left. That. Was. Awful. The clock was winding down on me and I really want to finish the singles.

Back to the rope. Just jump, don’t think. Time. 39 singles in. Nowhere near finishing the 3rd round.

Suddenly I wanted 600. I was only 11 reps away from 600! I didn’t really have a goal going into the WOD, but suddenly I do.  It looks like I’m going to have to try it again on Monday.

Editor’s Note: Tasha added 31 reps to her score on Monday and ended up with a total of 620! Yay Tasha!

What did you think of open workout 15.3? Did you get your first muscle-up? What are your thoughts on 15.4 and what do you predict for the final open workout? Let us know in the comments below!

In the meantime, let’s get conditioned. Here are your Strong Figure Conditioning Workouts for the week:

Workout One: 14 Minutes–As Many Rounds As Possible:

Look familiar? I broke this up a little more for you so that you don’t completely fatigue yourself in this. If you don’t have equipment, sub 25 squats, 25 push-ups (any variation), and 50 mountain climbers.

If you don’t have a kettlebell, sub seven dynamic lunge jumps (don’t forget to alternate legs each round).

Enjoy these last two weeks of the CrossFit Open, Tasha’s posts, and don’t forget to comment with your thoughts below!