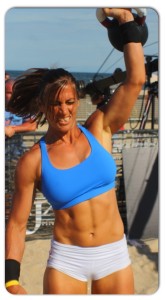 My name is Kristen Graham and I am a Coach and Owner of CrossFit Toms River down at the New Jersey Shore! I am a graduate of Stockton University with a degree in business and work for the NJ Department of Banking and Insurance as a Financial Examiner. I am a career woman, a mom, a wife, a sister, daughter, friend, a coach, a part owner of CrossFit Toms River, an amateur chef and of course a passionate athlete. I wear many hats but my heart lies in the heat of competition.

I have always been very lucky in sports even from childhood, my parents were always supportive of my soccer career. They trucked me around the Tri-State-Area and my dad was always my coach! I am the oldest of 3 and am lucky enough to have both my parents support me to this day in my CrossFit/Functional Fitness endeavors. My mom (Mama C., as she is referred to at CFTR) and sister (Coach Jen) are both heavily involved in the CrossFit Community at my box and my brother has traveled with us to watch me compete.

I have been involved in CrossFit for 3 years. Shortly after my daughter was born I realiz

ed I was having difficulty losing the post baby weight and joined a local CrossFit gym. My goal was strictly weight loss until I realized what CrossFit really had to offer. It opened my eyes to competition which I had missed since Istopped playing soccer. There is nothing like the heat of competition and the adrenaline rush you get at the call of 3-2-1 go. I look forward to that countdown everyday whether I am training alone, with a class or competing.

My husband Chris (also a coach at CrossFit Toms River) and daughter are my biggest supporters. Chris and I have been together since I was 19 years old and have grown up together over the past 10 years. His constant push and belief in my abilities is why I am able to pursue my CrossFit endeavors. My daughter is 3 years old and there is nothing more magical than hearing her little voice yell “go mommy go” in the middle of a lift or workout! I want to inspire her and her generation to always dream big and work hard.

Over the past year, Coach Ray has really taken me under his wing and has been programing my weaknesses. I owe much of my success this past year to his constant eye and support and to the constant support of CrossFit Toms River’s Community as a whole. I am lucky enough to have many coaches here to work with; each with their own niche for which we all benefit. It has been a big year for me in the realm of personal records and I attribute much of that to the backing I have from my box.

I love what this sport has given me so far and I look forward to having the opportunity to inspire more young athletes.