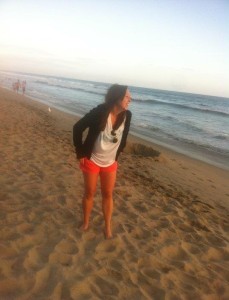 My name is Ally Arts, I am currently living in Alexandria, VA, but originally am from Phoenix, AZ.  I graduated from Arizona State University with a degree in Political Science, but have always had a passion for fitness.
I started swimming shortly after my 5th birthday and always choose the pool when given the opportunity, but knew if I wanted to be healthy I needed to branch out with my fitness routine. Since then, I have run seven half marathons, a Tough Mudder, a sprint triathlon, a handful of 5ks, and a GORUCK Challenge.  I am already signed up for a couple more GORUCK events, and am hoping for the chance to begin competing in some CrossFit competitions.
When I first heard about CrossFit three years ago, I was intrigued  but was never able to commit the time and money to join a box.  Instead, I began adding functional movements into my workout routine, and started doing more HIIT workouts.  When I moved out to DC in the summer of 2012 for a new job, I finally bit the bullet and joined a CrossFit gym.  I loved it so much, six weeks in I did my first team CrossFit competition during the Capital Affiliate League.  I received my CrossFit Level 1 Trainer Certificate in April 2013 and really want to get my Olympic Lifting certification in the near future.
My goals for the future are to complete a GORUCK HEAVY (24+ hour challenge designed by Army special forces), get my Oly certification, and increase my strength to be competitive in the 2014 CrossFit Open.  I want to share my passion with others, and teach people what they are capable of.  I believe that everyone has what it takes to be strong and healthy!
Best,
Ally