Is the New Study Linking Red Meat to TMAO Valid?

This is a sensitive issue for me because beef is awesome and it gets a horrible rap — some of you may have read the new study supposedly linking red meat to increased TMAO and then linking TMAO (a bad gut-bacteria) to heart disease.  In this study 6 people were given 8 oz of red meat.  Five of the subjects were meat eaters and the other was a vegan.  After eating the red meat the five meat eaters all had an increase of TMAO in their blood tests; whereas, the vegan did not.  The study suggests the meat eaters had more of the bacteria than the vegan because they ate meat regularly.  Additional studies of 23 vegans and 51 meat eaters showed that normally, the meat eaters had a greater increase of TMAO after ingesting meat.

Also, if you look at this study closely, you will notice the researchers themselves do not actually say there is an association between TMAO levels in the blood and heart disease.   And even the lead researcher, Stanley Hazen, does not actually say red meat is bad.  It seems like the problem isn’t red meat, nor is the problem carnitine (the supposed culprit in the media reports of the study but not the study itself); the problem seems to be in the gut bacteria called TMAO, and maybe the anti-meat media reporting this study.

This is not the first time we have heard health conscious people, including supposed experts, talk about avoiding red meat.  The normal response is – I avoid red meat because it is high in saturated fat.  I have even heard people say – my family has a history of heart disease so I don’t eat red meat.  First of all, saturated fat actually decreases your risk of heart disease.  It can lower your LDL (bad cholesterol) and it can reduce your ratio of total cholesterol to HDL (good) cholesterol.  Both my mother and father’s side of my family have heart disease.  My dad’s brother died of a heart attack in his early 50s.  And my mother has had a heart attack.  I have done extensive research on what is good and bad for your heart.  In my last health physical, my cholesterol was extremely low despite both of my parents having high cholesterol.  In addition, my blood pressure was on the low end of “normal” despite both of my parents having high blood pressure.  And I eat red meat 3 to 5 times a week – approximately 12-15 servings.

Many experts say that your risk of heart disease is impacted by three things: genetics, lifestyle, and nutrition.  Clearly my genetics is a strike against me.  And my lifestyle is less than ideal – high stress, limited sleep, and a constantly changing schedule.  So how do I have good numbers in my blood tests?  It has to be my nutrition – my multiple servings of red meat.

Very few people talk about beef as a health food but half of the fat in beef is oleic acid, which is the same healthy fat that is found in olive oil.  Why is olive oil touted as healthy, but not beef?

Add to this, beef is one of the best sources of protein and it is a great source for zinc, B vitamins, and iron.  Women, listen up:  Many women suffer from iron deficiency.  And red meat is your solution.  Do you wonder if you are iron deficient?  A good sign is if you find yourself cold when others are not, this may be due to low iron.  Ideally, you want to eat the red meat in its purest form so that you don’t cook out all of the nutrients.  Arnold used to eat raw steak in his Mr. Olympia days.  I realize it is already asking a lot to convince you to eat beef, let alone raw beef.  But if you can handle rare, then that is the way to go.

Here is a recipe for those of you who aren’t quite ready to take the rare meat challenge:

I Don’t Have Time to Make Dinner Roast 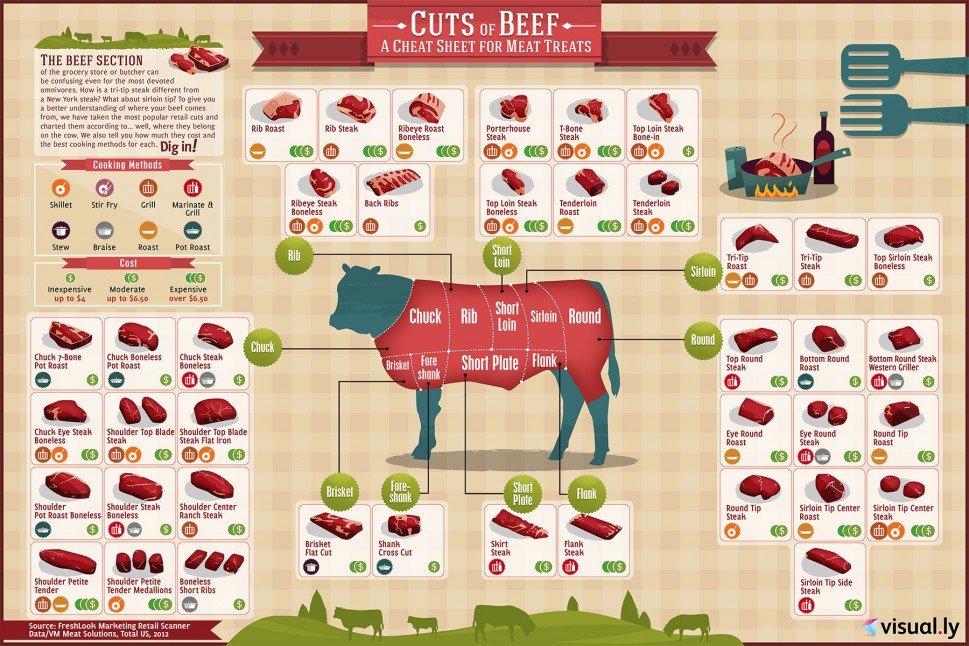 If you love red meat, have a meat recipe to share, or you just think Erik is completely wrong, please share your comments below!