WASHINGTON, D.C. (September 11, 2014) – The final regular season match for the DC Brawlers in the National Pro Grid League will take place this Sunday, Sept. 14 vs. the New York Rhinos at the Walter Pyramid in Long Beach, Calif. at 3:00pm PT.

The event will be a doubleheader and includes a match between San Francisco Fire and Los Angeles Reign at 6:00pm PT.

The Brawlers hosted the Philadelphia Founders at the Patriot Center for the team’s first home match on Aug. 27.  The Brawlers put forth a dominating performance for the hometown crowd winning 22-11.

Taylar Stallings, Lindsay Menerey, Tim Carroll and Marcus Hendren have had standout performances for the Brawlers in the inaugural season of Grid.

DC fans can tune-in to the livestream at www.npgl.com. Ticket information is available at https://www.npgl.com/content/posts/eastwest-doubleheader-on-sunday

Following the trip to California, the Brawlers will head back to the east coast and participate in the post-season tournament in Charlotte, N.C.

For more information on the Brawlers, visit www.dcbrawlers.com.

Grid is the world’s first professional spectator sport with co-ed teams that compete in strategic athletics racing. It’s a mainstream sporting league that is fan, TV and sponsor friendly. Each two-hour match features two 10-person teams (5 men, 5 women, one of each being over 40 years old) going head to head in 11 fast races. Grid races are easy to follow and are played with pre-set rules and unlimited substitutions designed to force teams to strategize.

About the DC Brawlers

Founded in April 2014, and located in Washington, DC, the DC Brawlers is an official team of the National Professional Fitness League. The team embodies the core principles of integrity, toughness, ferocity and strength. Featuring both male and female functional fitness athletes, the DC Brawlers seeks to inspire the fight within.  Follow the DC Brawlers on social media for regular updates: Facebook.com/DCBrawlers, Twitter.com/BrawlersDC and Instagram.com/dcbrawlers. 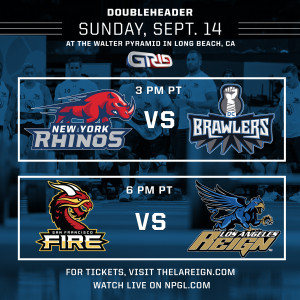