By now I’m sure most of you have seen the picture of Ricky Bobby and Cal Naughton Jr, friends in the Talledega Nights movie, praying around the table: 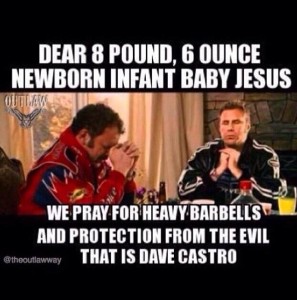 Oh, Dave Castro. We love you and hate you, but mostly hate you.  We hate you because so far, for most of us, the Open WODs have been awful and you announce the WODs with arrogance. The smile on your face when you announce the WOD translates into “I’m about to crush your body and then your soul with this WOD.” And you’re right, Dave, you crush us. (Read Tasha’s 14.1 and 14.2 experiences.)
However, 14.3 was announced and didn’t seem that bad. Box jumps and deadlifts?  14.3 is going to be my jam! I felt good about it.  I’m not a deadlifting machine and I’m not the fastest with box jumps, but this seems doable. Is this real life? What’s going on here?

As soon as it was released I received texts from friends:

That’s in my wheelhouse!
At least it didn’t have burpees.
I’ve got this!
I may actually make it to the 2nd round of the WOD.

Before we get to my 14.3 experience, let’s back up.  A couple weeks ago my good friend, Vivian, asked me to run a 10K with her. I also CrossFit with her.  She asked me to run with her and I’ll be honest, my initial reaction to running made me gag a little and I had flash backs of my half marathon back in October with gigantic blisters on both feet. No. Not running. Nope.  But my reply to her was, “Yeah, I’ll run.”  She’s training for a 10K next month and wanted to get one in before the big day. She also wanted me to run with her to keep her motivated to run the entire time. I was surprised and flattered that she would ask me to be her running buddy for this race!  We got another friend from the box, April, to run it with us. It was going to be fun!

Friday night, night before the race, and it hits me: you’re running 6.2 miles tomorrow and you haven’t run since October. AND this course has hills, something you hate.  Oh well, I’ve pushed through worse with less training.  I loaded my Nano (iPod, not Reeboks) up with heavy metal and old school hip hop (don’t judge me) and got my running outfit ready (always my favorite thing to do before a race).

Saturday morning rolls around, the day our box usually dedicates to just doing the Open WOD, also the morning of our 10K.  I was nervous! What if the hills kick my ass and I have to walk? I don’t want to let Vivian down. Then, just moments before the race starts, the nervous pee hits me and I’m worried about being that girl who peed on herself.

I hit play on my iPod and tried to push through the first two miles, which are always the worst for me. My plan was to run next to or behind Vivian the entire time, let her be the pacer.  I tried to take my mind off of the “target hill” that we’d have to run up, or the 476 hills in Freeman Lake.  Yes, the hills sucked, all of them, but each one wasn’t as bad as I remember.  Maybe it’s because of all the squatting we do in CrossFit and how they have changed my thighs.  Stronger maybe?

And Vivian, if you’re reading this, I’m sorry for not being talkative on the course. I’m sorry if I shouted out the few words I did speak to you because my music was so loud.  If it was too loud, I’m sorry you had to listen to an entire Foxy Brown song (again, don’t judge me, haha). I’m sorry my breathing sucks and it probably sounded like you were running next to a 65-year-old truck driver who has been smoking for 62 years of his life. I’m also sorry I had you sprint with me, uphill, for the last little bit of the course to the finish line.

You guys, Vivian did GREAT! Just like I knew she could and would, she ran the entire time!  Her goal was to finish between 1:00 or 1:15 at the most. She ended up finishing in 59:02 … under an hour! PR! I was so happy for her!  She kept an even, steady pace the entire time and, from what I could see, wasn’t bothered too much by the hills.  The 10K next month will be on a much flatter course, so I wouldn’t be surprised if her time drops. April smashed it too. She ran the entire time and finished in 57:00 even!

We left and headed back to the box.  14.3 had just started and everyone was doing great.  Being that I was warmed up, I figured I’d go ahead and give it a try.  Why not, I feel fine, let’s get this over with.  The night before I watched the 14.3 Chalk Bucket tips and had a plan: set the weights out (stacked on the edges, easier to grab), no clip on the bar, use the skinnier bar, turn the box a little, step up on the corner, and push off on your thigh. I was so glad to hear that step-ups were allowed. I’m SLOW on box jumps.  I tend to land in a FULL squat on the box and I waste a lot of time standing up to extend my hips all the way, and then I have to step down with one foot.

The first 10 deadlifts at 95# were a breeze, touch and go, unbroken.  Then the box happened.  I stepped up the first time and my thighs screamed “F*ck you!” Ouch. I was a little wobbly on the step ups, probably because I just ran 6.2 miles, ha!

The next 15 deadlifts at 135# weren’t easy, but not hard. I managed to go unbroken on those too. However, the next 15 step ups were brutal. My thighs felt weak and hurt each time I stepped up.

Next came 20 deadlifts at 155#.  Those tested me.  I think I got three in a row, at most, a few times. But I had to start going for singles.  The 15 step ups were nasty. My quads felt like they were on fire and cussed me each time I got up on the box.  I wobbled a few times and prayed to baby Jesus that I wouldn’t fall off of the box. Jeremy was my judge for this WOD and kept me motivated the entire time. By this point he was yelling something about going faster.

Next up was the big stuff (for me), 25 deadlifts at 185#.  Those were singles, and it was all I could do to pull each one off of the ground. The back of my thighs were hurting and I was rethinking my poor choice of a warm-up: 10K.   It was coming down to the last few seconds and Jeremy yelled, “Get 10 reps!”, and I managed to do it with a about seven seconds left.  I dug deep and pulled out one more, making it 11 deadlifts at 185#.

I feel good about it. My score isn’t the highest in the box, but I made it to the fourth round AND pulled 86% of my max deadlift 11 times … after running a 10K!

I may try this one again.  I don’t see myself pulling all 25 of the 185# deadlifts, but maybe I can get at least one more rep in there.

Yeah, 14.3 wasn’t too bad. But looking back on the weekend, the 10K was the best part about it.  I loved being there to see Vivian not only PR, but beat the time she had planned in her head. 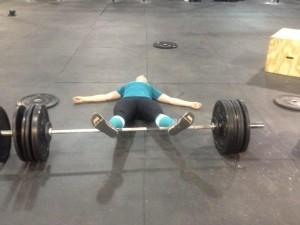