How CrossFit is Ruining My Life:

Before I got into CrossFit I was an ok lifter. I pulled decent weight in any lift. I performed intervals on the treadmill for cardio and I taught aerobics on the side. I worked out every evening, and ate well–for the most part. I wasn’t really “injured,” I mean, my shoulders always seemed to hurt–even then. But whatever, life was fine or at least as good as can be. I didn’t have much to complain about.

Then came CrossFit. All of a sudden the need to be even stronger took control of my life. OMG if I can’t deadlift three times my bodyweight, I’m not FIT?! (This is what I was told at my L-1 Trainer Course. I have 100 pounds to add to my DL before I’m fit.) If I can’t back squat 250+ I’m not elite? I have to do upside-down pushups with my hands on plates, do pull-ups three, no, four different ways, and what the hell is an “OLY” shoe?! Or worse, a NANO?!!!

The standards of performance for crossfitters is insane. And it’s because CrossFit allows normal people like you and me to be a freakin’ STAR every single day in the gym. Imagine you told a high schooler that if he trained like an NFL quarterback that he’d go pro within a few years. And he started comparing himself to RGIII and following the same workouts, three times a day, without any of the other conveniences like a medical doctor on call, physical therapist at his fingertips, Lord knows what kind of specialized supplements, hydration products, or nutrition plan. All you have is this kid busting his ass to emulate his favorite pro baller and killing himself in the process. You’d call him crazy, right?

THAT’S WHAT WE’RE ALL FREAKING DOING!

The thing is though, I sort of also really love it. Like, a lot.

If I never started doing CrossFit, there’s NO way my shoulders and traps and quads would be my favorite body parts. Ok, maybe quads…but never shoulders. Handstand holds, push-ups, snatches, clean and jerks….ROCK. And you can do those in any gym (except Planet Pizza and Cupcakes), but there’s just something different about throwing down your OLY bar, rushing to the wall, repping out 10 handstand push-ups, and racing out the door to bust out a 400 meter run. You just don’t do that anywhere else!

BUT that said, I have a LOT of pet peeves with it. I know, I know, I’m late to the game in my “blogger must post something about CrossFit gig,” but I’m tired of people either flat out drinking the kool-aid or downright trashing it and its members. There’s a LOT of good in CrossFit. There’s also a LOT of bad about it too. I’m no pro athlete as much as I wish I was, but I’ve been around CrossFit for a good five years. I’ve seen a lot, experienced a lot, hated a lot, and loved a lot.

Here are 9 things that piss me off about my favorite sport: 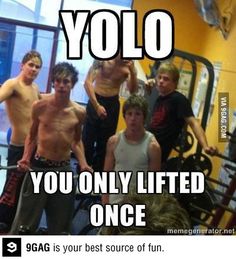 I’m actually adding this a couple days after I started drafting this post. Last night, I couldn’t sleep between 3:30 and 4:30am. So of course, I got on Facebook. I could NOT believe how much CrossFit bashing I saw! It was like all the haters came out past midnight or something!! One person shared a video from the CrossFit games called “Worst Deadlifts of the Games.” The guy who shared the post–total skinny/zero muscle guy, btw–posted the caption “Cross Shit. Where bad form is the norm.” First of all, these were freaking GAMES athletes. And the deadlifts in the video were nothing under 365–which was a female deadlift, btw. Are you telling me for ONE second that A) every deadlift MAX OUT looks perfect? No matter who you are, I’m almost willing to put down money that every person pulls a poor 1-RM, especially when fueled by adrenaline in the middle of a competition. I was at the Arnold Sports Classic this year and I watched FAMOUS STRONGMEN deadlift well over 1100 pounds and guess what? No one is compiling a video making fun of them! OH and B) I really want to see this skinny f#*$(&#er deadlift over 500 pounds. WITH good form. HELL, I’d love to see him attempt the womens’ weights. SERIOUSLY?! WHY DOES EVERYONE FUCKING RAG ON CROSSFIT SO MUCH!?! (Ignore the fact that my first 9 pet peeves are ragging on CrossFit.) I’m complaining because I do CrossFit, I know it, I live it, I know and understand the coaches, the boxes, etc. The complainers are the ones who haven’t tried it, are scared to try it, are intimidated by it, and are too freaking ignorant about it to learn anything. Instead, they just post videos to make themselves seem cooler or something. “Hey, let’s make fun of these guys because they do things we can’t!” Yeah some CrossFitters try stupid things and act a little cocky. (Little?! I know.) But CrossFitters don’t post videos of powerlifters benching to boards or squatting to boxes. CrossFitters don’t post videos of bodybuilders curling in the squat rack or working on their calves! (Which A) I really don’t see what’s wrong with either, and B) if you ARE a CrossFitter who does this, DON’T EVER DO IT AGAIN.) Everyone needs to get over themselves, STFU and then HTFU. SERIOUSLY. I lost sleep over that one last night and OMG it still pisses me off.

Now before you readers go off in the comment section about how much of a bitch I am, let me say one thing: I have made every freaking mistake on here. Well, except steroids. Illegal things scare me. But I’ve ignored good advice. I’ve pushed too hard and injured myself. I’ve switched a program too soon or got bored with a nutrition plan. I’ve made fun of crappy lifters and bad coaches. We aren’t perfect. I am no where NEAR it even though I tell Erik he’s so lucky to have someone like me. (Sarcasm. Sort of.) These are just things that get under my skin because they are lessons that haven’t been learned yet by others. And as much as I can sit here and harp on CrossFit and its cult-members, I hate to admit it, but I’m one of them. Can’t you tell by that last pet peeve?