Every one needs a role model. We all enjoy having a person to look up to when pursuing a career, working out in the gym, or raising our children. I love fitness role models. Whether a bodybuilder, a crossfitter, or a gymnist–I love the dedication and perseverance I see in women across the globe. And if you take even five minutes to glance through various workout boards on Pinterest, I’m guessing you would see close to a hundred pictures of strong women who act as role models for myself and for others. But there’s one woman who you may not know. Your boyfriend or husband probably knows her because of her profession, or simply because she was the recent cover of ESPN’s Body Issue Magazine. She is pretty hot, even I’ll admit. And I think that you should know her as well–for reasons far beyond the fact that she has a rock solid, strong figure. She’s one of my newest role models, and she’s appearing on TV this Saturday night–your beau knows this too–because she’s one of the first two females to professionally fight in the UFC.

Rhonda Rousey is fighting this weekend in the UFC Title Fight. That’s right, THE title fight. Why do I care so much? Better yet, why should you?

When my boyfriend told me about this chick (yeah, I didn’t know of her before, either) I at first thought it was kind of silly. I enjoy watching the occasional UFC fight–especially if the guys are hot– 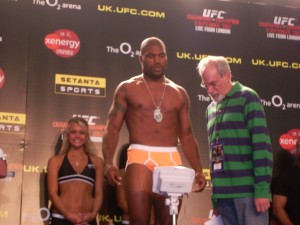 so I immediately suspected that he only watches her because she’s hot. Of course I don’t give him enough credit. Ever, really. Because when he started sending me information, posts, pictures, videos of her, I was floored. And not at just her beauty. This girl is a badass beast.

True, she does look good, but that’s because of her intense training and strict diet–which I love. But what’s more is that she’s mentally tough: she was born with a speech impediment and was made fun of all throughout school. She was kicked, laughed at, and taunted daily. She lost her father. She had to fight her way through depression, humiliation, and even quit school to be home-schooled by her single mother. But when she became interested in Judo–a martial art form–during her teenage years, she slowly started to turn her life around. She began to find herself and her confidence. Now, she’s an Olympic Judo champion; she’s passionate, dedicated, and beyond all, a born winner with a fighter spirit. She’s good, she knows it, and she’s not afraid–anymore–to be herself. You just have to love that in a chick.

Rousey recently did an interview with Fitness Magazine where she reported on her training, her success, and her cover photo for ESPN’s The Body Issue. She trains in Judo, striking, wrestling, grappling, strength conditioning, Pilates, and even trains on sand dune hills. She only rests two to three weeks out of the year and she credits the variety in her training to her success, her phenomenal bod, and the lack of boredom when training multiple times throughout the day. To this day, Rousey remains undefeated in her two years with MMA fighting.

And as for her diet, this may be my favorite part. When in training, she follows a combination of a Paleo diet with the Warrior diet. In case you’re unfamiliar with either one, the Paleo diet is the caveman diet: one eats nothing that can’t be found naturally–nuts, seeds, meats, eggs, berries, and vegetables. The Warrior diet is a diet in which the athlete eats one big healthy meal per day. I personally don’t know much about the Warrior diet, but I do have experience with Intermittent Fasting which is similar to this plan. It usually proves effective for helping people–women especially–lean out. Ronda eats a very large dinner after she trains made up of healthy food choices. She usually alternates a higher carb dinner with lower carb dinners and she said that she eats berries throughout the day–all day. She’s also a big fan of coffee–another personal favorite of mine. Ronda keeps her metabolism boosted, her insulin levels low, and replenishes her muscles after training at night. I love it.

Want more? In an interview with espn.go.com, Rousey reported that her favorite body part of hers is her Venezuelan butt, that she only trains with men, and after she’s won a fight–she eats junk food for two weeks. And she not only looks and acts tough, but her injury list is miles long:

“Knee surgeries, separated AC joint, broken collarbone, broken more toes than I can count, broken foot, sprains in my knees and ankles. I’ve dislocated my elbow so many times that my ligaments are loose. I’ve broken my nose a couple of times; I have a deviated septum. My nose just squishes back, so I can get punched as much as I want and it’s not going to deform. What can I say? It’s a dangerous job.”

And what does she say about all that pain?

“I look at it as information being sent to my brain. Then I can take that information and decide what to do with it. My body is telling me it’s in pain because it thinks I should stop, but I can beg to differ.”

Rousey reports that she just wants to be the most dangerous unarmed woman in the world, and she could care less about any of our opinions. To be STRONG, in Rousey’s words, means “not having any fear.” That’s what makes her exactly who she is and it’s what makes her so easy to admire. Tough, strong, dangerous, and fearless: a role model we can all admire.

If you’d like to see Ronda in action, make sure you tune in this Saturday night (2/23) to UFC 157 Live on PPV as she takes on Liz Carmouche in the first female UFC Title Fight.

Are you tuning in Saturday night? We’d like to hear your thoughts on Ronda!