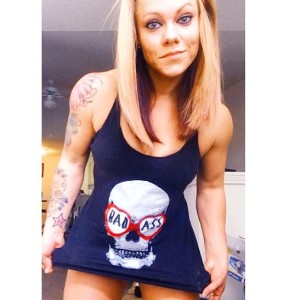 I’m currently training for RUM in February, using my coach, Brian Schwab’s training method , the Minimalist Method. I also train with Brian and my husband and team OBB at Orlando Barbell.

Ladies, have you heard this before?

You should dress up more, wear more makeup, do your hair, don’t get anymore tattoos, smile more, talk more, don’t get too big, you’re too skinny, don’t curse so much….

These things have been said to me all of my life. And I’m sure most women have gotten a few of these themselves. I am pretty much a little rebel and I will 100 % do the opposite of what you tell me unless what you tell me pushes me to grow or is positive. Just ask my mom…poor mom.

And you shouldn’t either.

I began powerlifting two years ago, and in those two years, I have put on about 20 pounds….mostly muscle…and some fat. I’m not super lean…as I like to eat, and I like to be strong which goes hand in hand with both lifting and eating. And I’m totally okay with that.

But what bugs me is that the more muscle I put on and the more people that come into my path, the more unsolicited comments I get. I go into the grocery store: “Are you a crossfitter?” At work: “Don’t get any bigger, you’re bulky.” Some old friends: “You’re huge…kind of fat”…and on it goes.

First off, when did it become okay to make comments on people’s bodies???? Never. Second, just shut-up.

Now, a lot of people will and have said, “Take it as a compliment! I wish I got those comments! They’re just jealous!” And to that I say…No. I will not accept people telling me how to look, giving their opinion on something that is not their business, making inappropriate comments and bullying me as well as several other women.

Sure, sometimes people do mean it as a compliment, and in those times I do take it that way and I say “thank you” and move about my day. But, the ones that mean it in a mean way….yes, it does get to me. And I’m sure it gets to a lot of women who are starting to find or have found a passion in being strong, fit, and muscular. At first it’s fun: “Oh look, my arms are getting muscle! Oh look, I have quads!! But eventually, “Oh shit, I can’t fit into any of my clothes.” And at first, you get support from a lot of people: “You’re so strong! You’re so inspiring, that’s so awesome! And then…it turns to, well, people picking you apart and again saying inappropriate bullshit.

In the past few weeks, I began questioning why I do what I do. Why do I powerlift and put my accomplishments out there to be knocked on by every Tom, Dick and Harry who feels like saying something about me? Why do I keep pushing when I have to deal with strangers commenting on my body? WHY??

And after much thought, and I must admit…I considering quitting…until I realized that the support I get from the people who actually care, makes it all worth it.

The Girls Make It Possible

Why didn’t I stop? Who kept me going?

The overwhelming feeling of joy, accomplishment, humbleness, love and respect that floods my heart when someone reaches out to me to tell me I made a difference or helped them in some way….BY SIMPLY BEING ME…by simply doing what I love…weighs much much more than any disrespectful comment ever thrown my way.

So, while it may bother me that my arms are big, or my waist isn’t tiny or I’m not the average girl who everyone finds to be “correct” or the social “norm” ….I am ME. And being me, is actually helping other people fight demons, break through plateaus, and change their lives. And I wasn’t even trying. 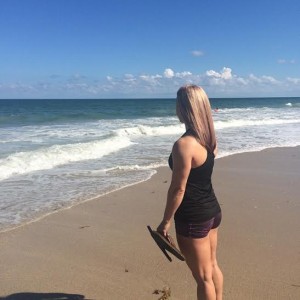 While mean people are out there trying to bring us down, we who focus on what truly makes us happy, come full circle and make those around us happy.

So, don’t stop when people tell you to stop. Don’t quit when what you’re doing makes you happy and you are doing something positive. I always have this thought in my mind that I want to change the world, I want to make a difference, I desperately want to help people…but, how, and what do I have to offer? And even though I might not change the world, I am helping people, and those people may go on to change the world….therefore, I changed the world…or was at least part of a catalyst for good.

All because I showed people me, doing what I love, being who I am and pushing past the stereotypes of what everyone said I “should” be.

I still became successful, and happy, doing everything everyone told me not to do, but everything that was exactly what I wanted to do.

And so can you. Don’t stop. Be strong and BE TRUE TO YOURSELF, ALWAYS.

April is a Doughnuts and Deadlifts sponsored athlete. Check out April’s athlete page on Facebook and give her a “Like”!

Have you encountered negative feedback for being a STRONG woman? How do you cope with other people’s rudeness? Let us know in the comments below!