I had a GREAT weekend–all starting off Thursday night with my early birthday present. (My birthday is actually in October so don’t worry if you just panicked that you missed it.) 😉

A night of FUN.

Erik bought me tickets to see the band FUN. I LOVE this band almost as much as I love Bon Jovi. And for those of you who know me, you know this is a very serious statement. And if Fun keeps putting out hits like “Carry On” and “Some Nights,” I might even like them more.

I’m actually not much of a concert-type of person–I’ve only ever been to four in my  life–two Bon Jovi and two Transiberian Orchestra. But I’m a HUGE fan of music in general so when I really like a band, I’m willing to stand in crowds of everyone taller than me, get calf and neck cramps, and be blown away by outstanding musical and performance quality. And that’s exactly what happened. Fun just ROCKED.

You know how some bands are great on the radio and then live they suck? And then there are the bands who are even better on stage? That’s Fun. I was left in awe.

Thank you Erik for a fantastic present and for a beautiful night!

My FUN continued Saturday with my second Superfit competition at Trident CrossFit in Alexandria Virginia. CrossFit Harrisonburg had sixteen members competing–meaning that I got to workout AND hangout with my friends all day!

I even ran into fellow friend and blogger Ericka from The Sweet Life (check it out!) who was volunteering at the event. I missed getting a pic with her–blame it on chaos of the day–but she also did a write up of the event and took some SWEET pictures! (Much better than the ones Erik and I got with our iPhones, though we are seriously trying to invest in a nice camera.)

One of the best parts of competing in CrossFit is the support from friends and family who come long distances to cheer from the sidelines. We may have had 14 athletes competing, but there were double the friends, parents, sisters, brothers, and even fellow crossfitters from our gym all there to cheer us on.

Just like in Superfit Richmond, I partnered with Strong Figure Ambassador, Trevor to tackle the three workouts of the day.

The workout was really fun. Trevor and I placed first in the push-ups with 112, sixth in the deadlifts with 52? and twelfth in the box jumps with 63? I can’t remember exactly but it was somewhere in that range. So overall we ranked fourth after that first comp. Heck yeah! That made the post workout refueling taste even better. 😉

Hanging out between workouts is always a highlight for me!

After refueling then pre-fueling for the next workout, we were ready to go again!

Workout two was pretty terrible on my quads. We had to complete 15 repetitions of the following complex: one power clean, two front squats, one shoulder to overhead press/jerk. My weight was 85 pounds and Trevor’s was 115. He did the first five and I did the last 10. Then Trevor did 15 pullups. After that, I did 10 complexes, Trevor did 10 pullups, and I finished the workout with three more complexes. The goal was 15-10-5 of all, but we had a six minute cap. We got 53 total reps! Oh and placed fourth! We got to keep our fourth place standing.

After rowing out my quads (I could hardly walk after!), I had some Progenex recovery whey, coconut water, a banana, and a paleo chocolate chip pumpkin muffin from Anita Little Paleo.

We decided now would be a great time for group shots.

Back to the action.

Workout three was practically designed for Trevor and me. Twelve minutes of rowing for calories (that’s all Trevor right there) but a buy-in of 75 kettlebell snatches!! I heart kettlebells so much. Our strategy? I did 55 of the snatches and Trevor and I alternated on the rower every 20/10 calories. We got done with the snatches in about three minutes–maybe less? And then rowed our effing hearts out.

I thought Trevor was going to throw up by the end of that one. Poor guy literally FELL off the rower at the end. But it was worth it…we placed first in the event!

Ohmygosh! The COOLEST part of that whole third workout was before it even started. While waiting for our heat to begin, Trevor and I met and got a picture with CrossFit Games competitor Christy Phillips! How cool is that?!

So with the third workout done, we were tired, but fortunately not yet finished. That first place win in WOD 3 secured out spot in the finals. The last workout? A bitch. No one saw what was coming…

And all with a 15 minute time cap. In case you missed it up there, yes, I did say 50 GHD wall ball throws. I’m STILL trying to get REGULAR wall balls down!! WTF?!

Trevor and I didn’t finish the workout (the clock ran out when we were on the run), but we did place fourth in it–and the overall competition. Seems like four was our lucky number yesterday! I’m so proud that we gave it our all–we tried SO hard, all day long!

How did we celebrate?

I usually have an abnormal problem of never feeling full; however, I’m glad to say that I ROLLED into bed Saturday night.

Yesterday, I continued my celebration with some more awesome food…

…and some celebratory Lululemon shopping in downtown Washington DC.

I even splurged again for dinner.

In all…I had a GREAT weekend.

And check out this video recap of the whole event!

If you want to laugh at Crossfitters making fun of themselves…check out these games athletes in their “Too Fit 2 Quit” video.

Don’t forget to comment on this post! We will draw a name at the end of the week for a free Progenex Force sample! 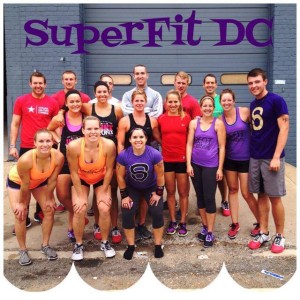