Shoes. They get us from Point A to Point B. Does it really matter what kind we get?? 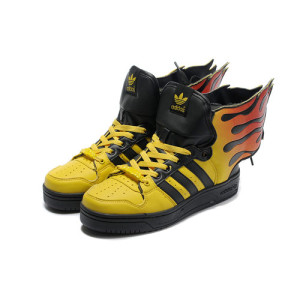 I used to get shoes based off of one thing: Did they look cool? As I became more involved in the running community and taking all that kind of stuff seriously, my outlook
has gone from looks to applicability. 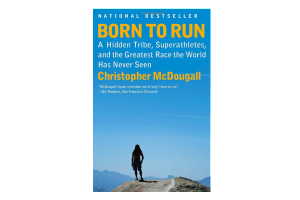 As the majority of runners have done, I read the book “Born to Run” by Chris McDougall. That book changed the way I look at running and shoes completely. My first official
pair of running shoes was a pair of New Balance that I bought prior to leaving for basic training and I was a big fan of them for years. I would end my year of a pair of
shoes by running a Tough Mudder in them, then donating them to the pile at the end. Reading Born to Run changed that in me. I decided to try the barefoot thing out. I
would go into my backyard barefoot and jog around. Then I would do sprints. The book was right.. my feet did seem like they were reaching for the ground with every
step I took. My toes were gripping the ground rather than just landing on it. There was no ‘shock’ effect like you get when you run on pavement. It was smooth and felt
as it should. Natural. 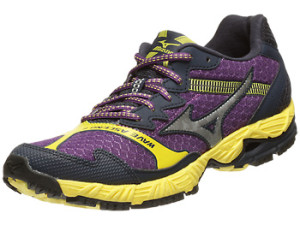 I went to a running store called Inside Track, and it was the first store that I got the feeling that they cared about getting you in the right shoe. They had me doing
all kinds of weird walks, jogs, and sprints. After watching me do all that stuff, they came out with about eight different pairs of shoes. I found out then that I had
a neutral pronation. After I tried them all on for comfort, I picked Mizuno Ascends. I cannot speak highly enough about these shoes. These are the shoes that I would
go on to run my first marathon in, place consistantly in the top 10% of all local road races in, and PR the Army Ten Miler with. I still stick with Mizuno to this day
when it comes to my road shoes. I can’t stress enough the importance of getting your gait checked everytime you go for new shoes. If a store cares about you as a runner,
then they will take the time with you. Another good habit is to bring your previous shoes with you. Check the tread on the bottom with the salesperson and identify
how your foot strikes and rolls.

As Stephanie mentioned in her post, a minimalist shoe will help with how your foot strikes. Being a heel striker isn’t 100% bad, but its not generally the best thing
for you. I was a bad heel striker back in the day and my knees and hips paid for it. I purchased a pair of INOV-8 Bare 200’s last year and started wearing them on a
day to day basis. Eventually I moved up to running with them as well. My strikes are perfectly mid foot now and it’s consistant. I give those shoes the credit for that.
I ran the Philly Rock-N-Roll Half with those shoes and my body felt great afterwards. So great in fact that I left Philly, and drove to a 5k right after. Your feet will
absolutely be able to tell the difference when you transition from a minimalist shoe to a regular shoe.

My favorite part about running minimalist? I have been injury free since I started using those shoes!

TRAIL
I was given a pair of INOV-8 Roc Lite 255’s to take to a trail running camp that was held in Texas last November. I wasn’t prepared for the type of terrain I was about
to encounter..Those shoes are perfect for dirt paths and gravel roads. We were running through some wicked terrain down there in Texas. I ended up getting hurt because
I stepped on a rock shaped kind of like a triangle, and the point went right into my midfoot. Internal bruise and I couldnt even walk. Lesson learned. For terrain like
that where you are going to be climbing over boulders and have all kinds of sharp things to deal with, get a shoe that has a rock plate in it. That would have saved me
some serious misery.

Obstacle Course Racing
The shoes that I SHOULD have taken to Texas with me, are my absolute favorite pair of shoes for running obstacle course races: La Sportiva Raptors. I am in love with
these shoes as much as I am in love with my Mizunos. They were slightly big at first on me, so I tried an old Army trick for breaking in new boots. I wore them in the
shower and then walked around in them until they dried. They conformed very well to my feet! These shoes are beastly. The outside of the shoe has backward facing rubber
spikes that tear through mud and provide extra stability on the trails. The middle forefront of the shoe has a number of rubber rectangles that actually move and sway a
little bit. When negotiating an obstacle, this is lifesaving. The rubber actually moves to grip the surface. Its crazy, but it works. The arch has an Impact Brake System
built in which truly does help you to stop quickly when stepping on something like a log for instance. My first use of these shoes was at the Spartan Super in Wintergreen,
VA. If you were at that event, then you know how brutal that terrain was, especially going through the woods by the creek. I did not fall or even slip one time during that
entire race. These shoes are tanks on your feet. I have yet to meet one person who I have recommended these shoes to, who wasn’t ecstatic about them. 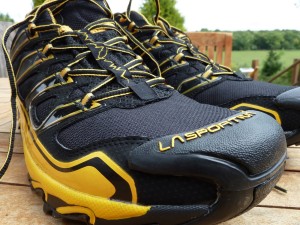 When buying a pair of shoes, be picky! It’s like buying a car. These will be a mode of transportation that you are going to rely on for at least the next couple of months.
If you dont feel 100% comfortable in them, try another pair. When you first put a pair on, before tying them, tap the heel against a hard surface. This will ensure that
your heel is firmly in the heelcup of the shoe, which will provide a true fit. Go somewhere where the staff is knowledgeable about running. Chances are you won’t find someone
like that at Dick’s Sporting Goods. Replace your shoes as you see fit. I’m not an expert on shoes, this is all from personal experience to include trial and error.