One of our Strong Figure Ambassadors, Annie Brees, is one of our many powerlifters we have on hand here at SF. Here, Annie gives us a run-down on some of the most common questions that arise about powerlifting, meets, terminology; and she even gives us a full recap of her very first meet! Get to know Annie a little bit more!

While I don’t blog a lot about my powerlifting training, increasing my strength for the three main lifts (squat, bench, and deadlift) has been the focus of my workouts since I began last May.  I have been so blessed to stumble upon an amazing powerlifting gym and team here in Des Moines- 22nd Street Barbell.  The coaches and members here have helped me with program plans, technique, motivation, and so much more. 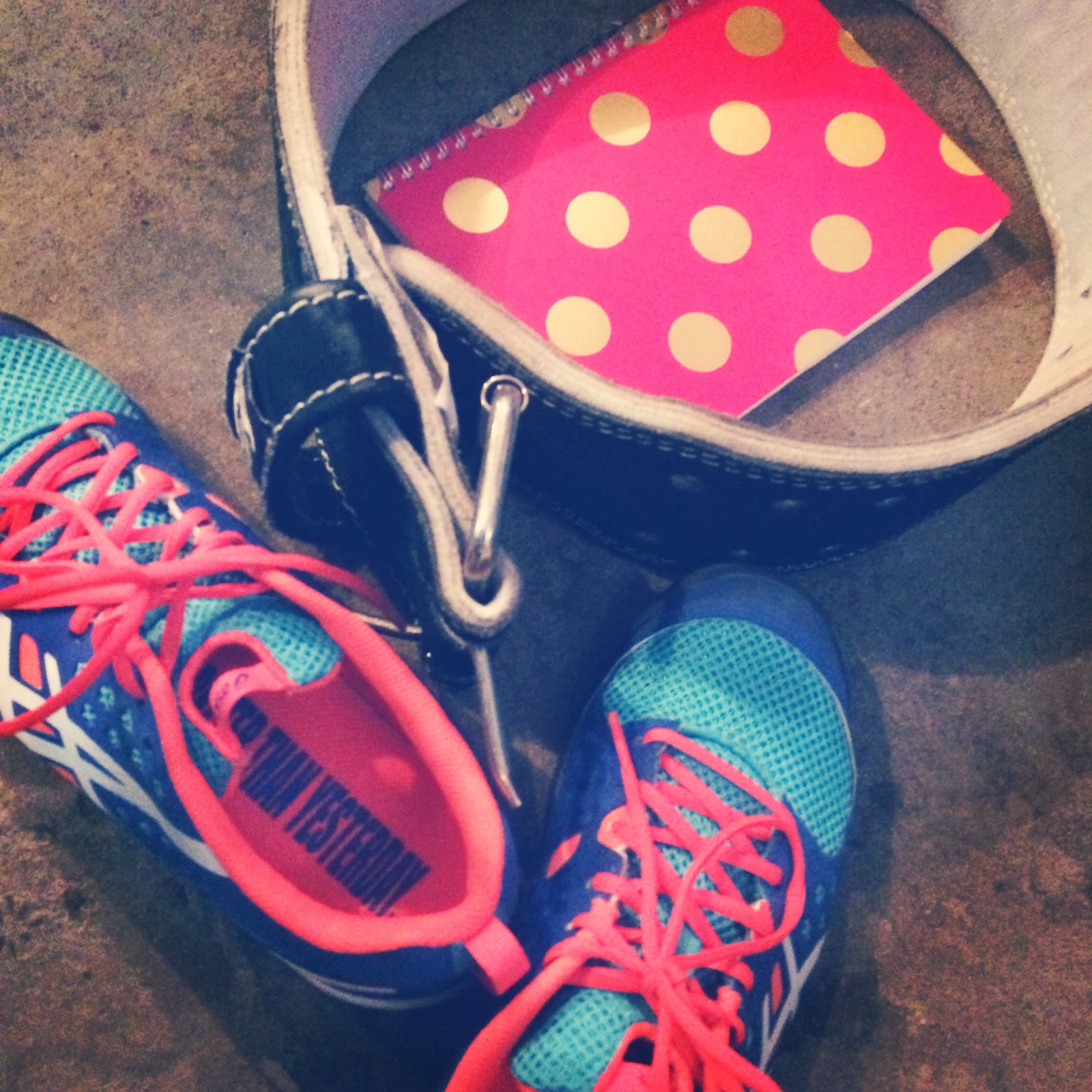 Saturday I am competing in the Nutri-Sport Fullpower Meet hosted by West Des Moines Crossfit in West Des Moines, Iowa.  It will be my first sanctioned full power meet. (Sanctioned meaning there will be a representative from the Southern Powerlifting Federation judging technique, and full power meaning I will squat, bench, and deadlift).

I wrote this post about what I have learned from powerlifting just in the first month and man, have I learned so much since then!  One of the toughest lessons I’ve learned since starting my training is that powerlifting is not about me vs. others.  It’s about me vs. me.  It’s cliche but it’s true.  I could write for days as to why I think this has been such a hard theory for me to accept, but the bottom line is that once I stopped comparing my lifts to other ladies, it has become a lot more fun.

With this meet approaching I’ve had a lot of questions from non-powerlifters, like my mother, about how a powerlifting meet works.  So here are my answers to some of the more common questions I’ve received about powerlifting. 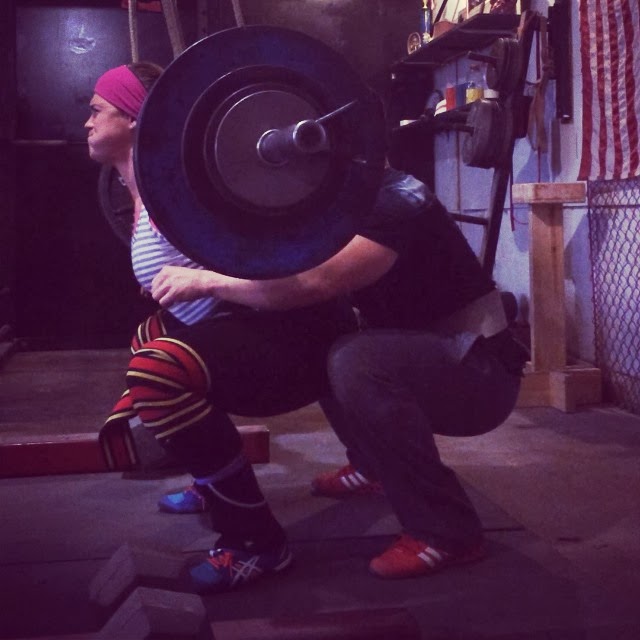 What do you do at a powerlifting meet?

Typically, a powerlifting meet includes testing your strength for a 1 repetition max in the squat, bench and deadlift, in that order. It is organized by weight class, gender and age.   There are judges to assess if each lift is acceptable (i.e. squat is deep enough, your butt stays on the bench, etc). You get three attempts in each lift.

What do you wear? 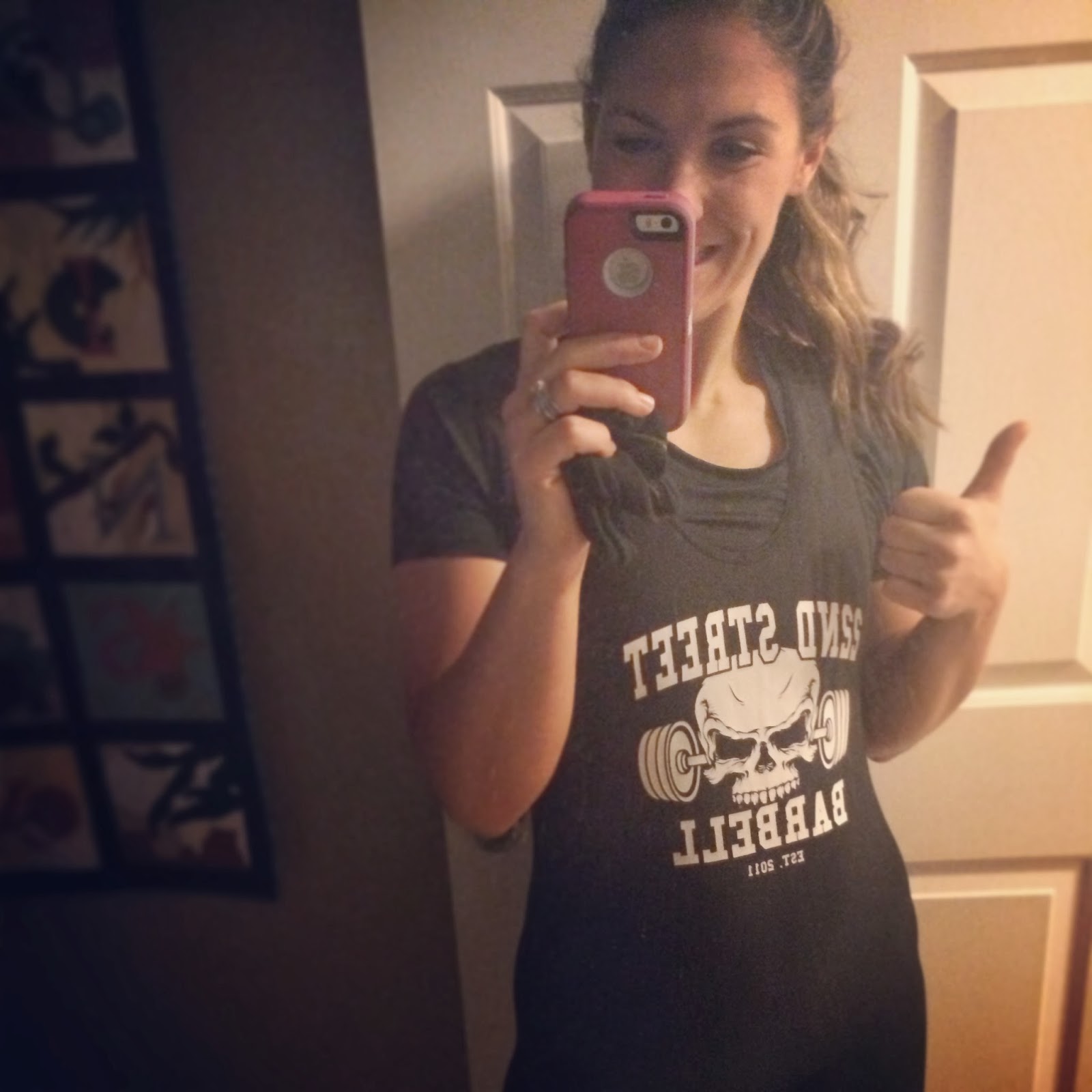 A singlet. Yea, I’m pumped about wearing a singlet….said no one, ever.  I will also wear my belt as well as knee high socks.  Knee high socks are a must for the deadlift as it’s common for shins to bleed from scraping the bar against your legs.

How do you know what weight to pick?

Lifters are encouraged to choose a weight they could hit for multiple reps on any given day for their first attempt.  The hope is that by doing this, you can shake some initial nerves and build confidence heading into your second and third attempt. If you miss a lift you cannot attempt a lower weight. You may take another try at that same weight or move up.  Second and third attempt weights are usually determined by how the previous lift goes, although most lifters have an idea of where they would like their final numbers to be.

How do you win?

Um, not sure. It’s not exactly on my radar, at least right now. I do know that awards are typically to given to the highest totals for each weight class and a best male and female lifter will be decided by crunching a bunch of numbers including their lifting total and body weight. It’s kinda over my head.  Maybe one day I figure it out. 🙂

And just in case you get a little lost in the lingo, here is a powerlifting glossary full of words that tripped me up when I was starting out:

Raw: Refers to a classification of lifters who do not wear equipment during their lifts.  The exception is a belt, wrist/knee wraps and/or knee sleeves.  This was a really confusing concept for me initially but now seems so simple. 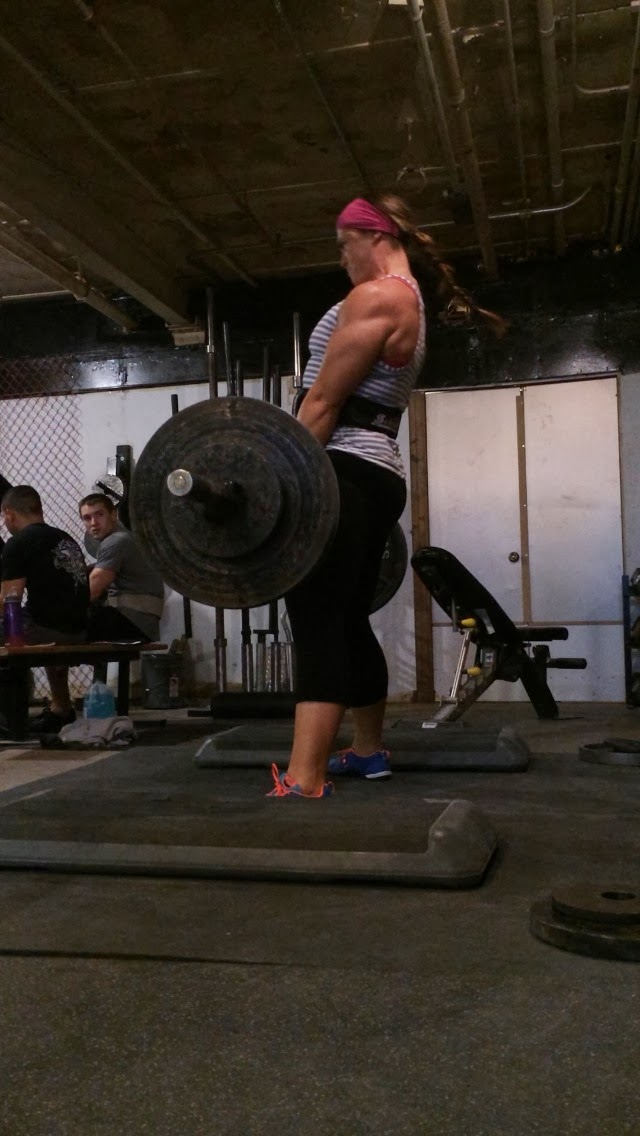 Wraps: Wraps for your knees are essentially thick ace bandage wraps on steroids.  Lifters can choose to wrap their knees to help support and rebound out of the bottom of the squat. While it does often add assistance in the squat, it is still considered ok to wear in a “raw” meet.

Opener:  The set weight you have chosen for your first attempt.  (i.e. My opener for the bench is 135lbs.)

Handler(s):  A handler is someone you trust that can help wrap your knees, spot you, provide lift offs, pump you up/calm you down, whatever you need.

Lift off:  In order to help maintain your positioning on the bench press it’s nice to have your handler provide a lift off.  It’s just like it sounds, they help you lift the bench and bring it out to your starting position.

How did it go?

The short version of my meet results goes something like this…. bombed in the squats, couldn’t get to depth in any attempts, had a pity party for myself for about 45 minutes, came back and hit two PR’s in the bench and the deadlift. But really, it was so much more. Did I hit my goals? No. Did it go as planned? No. Did I learn a ton about the sport and myself? Abso-freakin’-lutely! Let’s just get the cruddy stuff out of the way and talk about squats. The women were the last flight of squats to go, so even though the meet started at 9am we didn’t start squatting until one o’clock.  I had plenty of time to stretch and do body weight movements, but when it came time to warm up with the bar it was crowded. While I was expecting this, I still felt uneasy. My goal was to hit 350lbs.  I opened at 295lbs.  I felt confident it would be an easy 295 as I have hit that for six reps before in the gym. 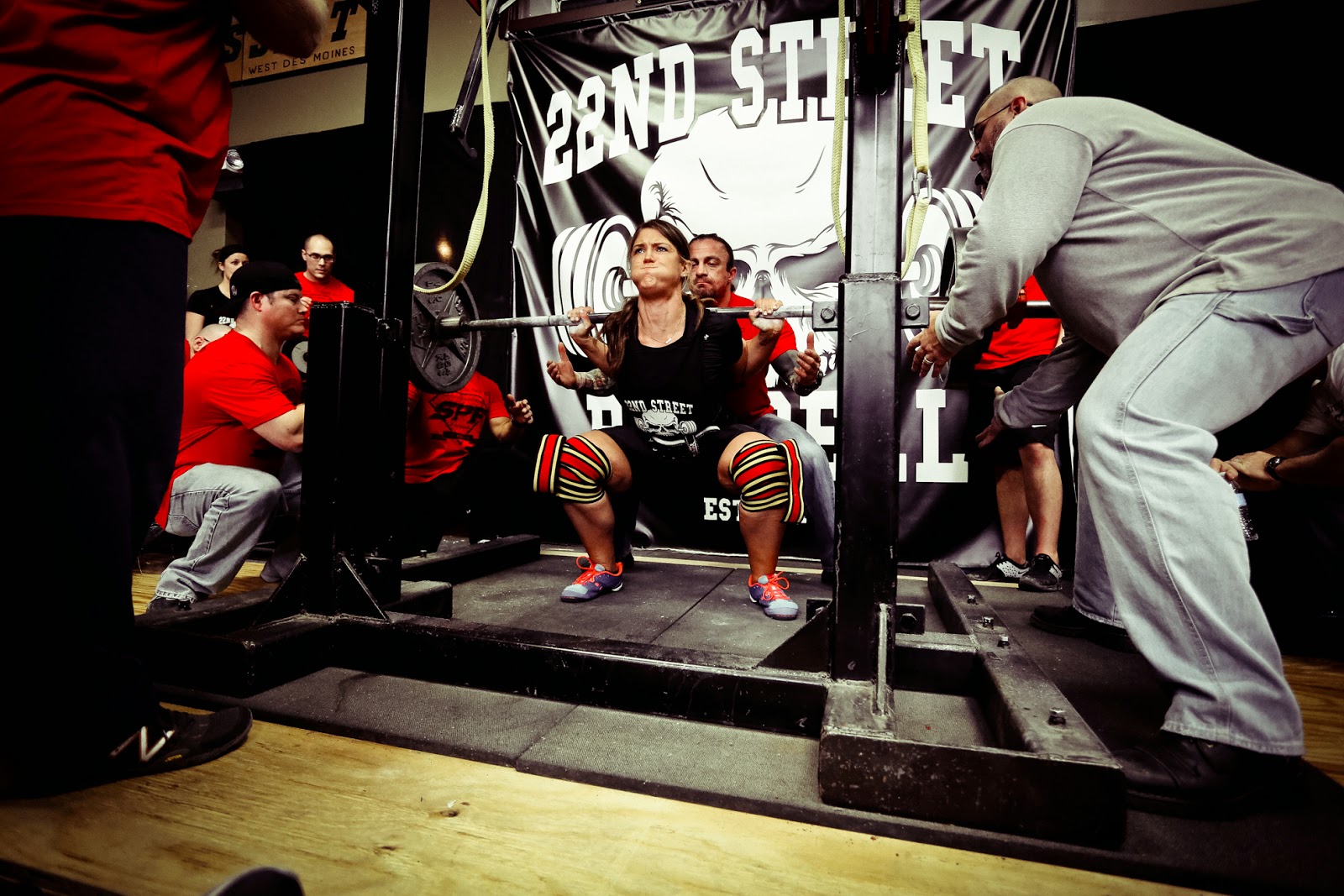 I had my handler, Drew, wrap my knees and head to stage for my first attempt.  I lifted the bar off the rack and immediately thought, “Shit, this feels heavier then I expected.” (Pardon my French). I squatted down and just get buried. Not a good start. Your opener should be easy!

My second and third attempts weren’t any better.  I didn’t hit depth on either attempt. I could feel the tears welling up in my eyes as I looked at the head judge and hear him say, “no lift.”  I walked off the stage, threw my belt and yelled an inappropriate word at the top of my lungs, took off my wraps and sat in the bathroom for the next 30 minutes. No joke. I was pissed. I was disappointed. I was sad. I was defeated.

Technically, I should have been out of the meet but Wes, the owner of 22nd Street Barbell and director of the meet gave me the option to still bench and deadlift. I debated just walking out the door and never powerlifting again. But I didn’t. I told myself to at least finish the meet. If I didn’t want to compete again, fine. Just finish the meet. 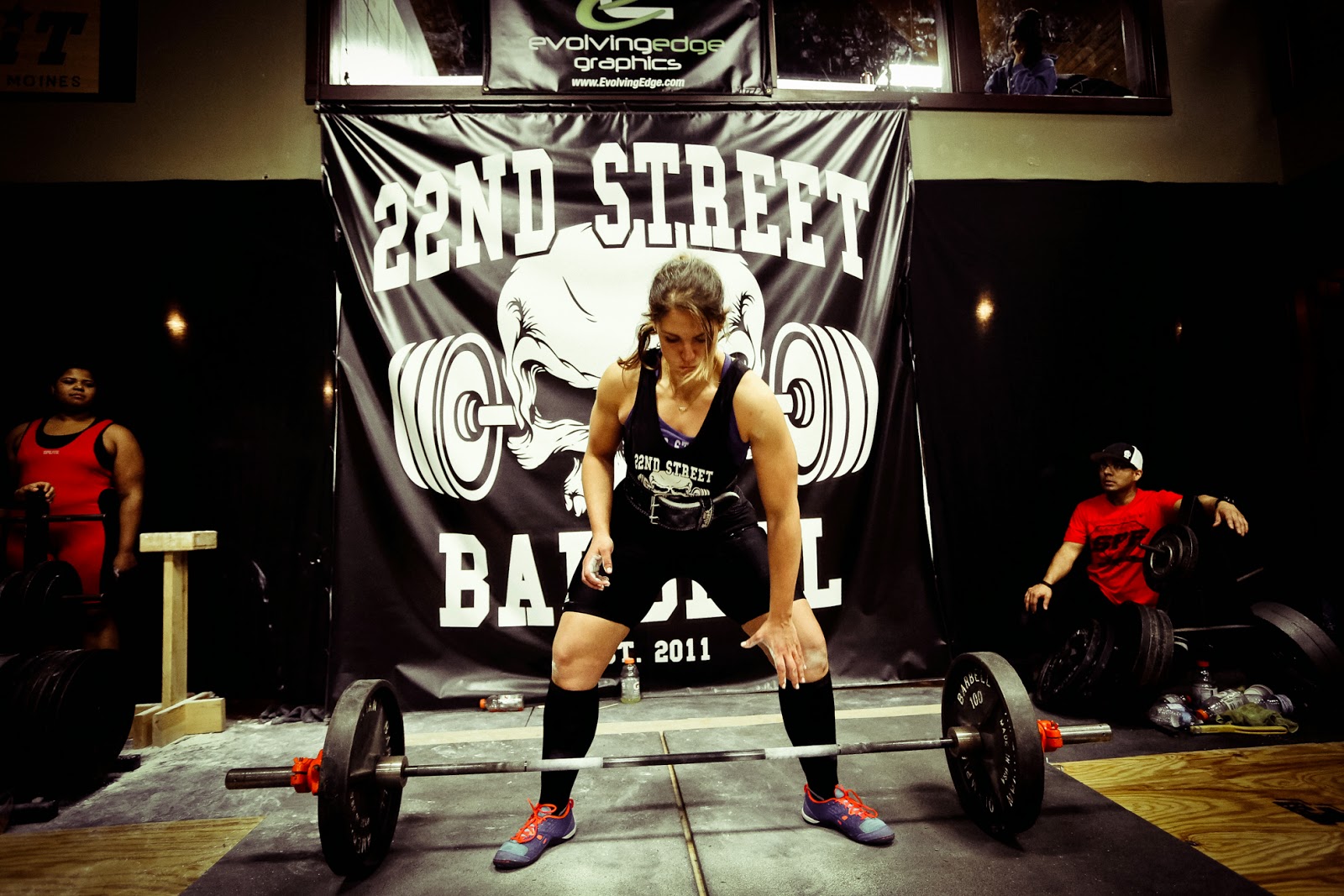 I’m not going to lie, mentally it was extremely tough for me to pull myself up from the disappointment of bombing all three squat attempts. Thankfully, I had a handful of people to help remind me that situations like this happen, even to the best and I can (and should) still press forward.

Kent Fleming was one of those people. This man just became the third man in the world to squat 1,000lbs raw and he took the time to share his experience of bombing out of a meet.

Are you kidding me? The man just hit the squat of his life and made history and he’s going to offer advice to me? Amazing.

Wes Keith was also one of those people. He handed me a folded piece of paper, told me all of these people have something in common and walked away. It was a list of amazing lifters like Kent Fleming, Caitlyn Trout, Sam Bryd and Eric Lilliebridge.  All of them had bombed out of a meet at some point in their career. The tears just poured out (and still are as I write this). Immediately any thought of giving up left my mind. I was going to not only finish the meet but I was, and still am more determined than ever to commit to this sport 100%. I can’t thank Wes enough. 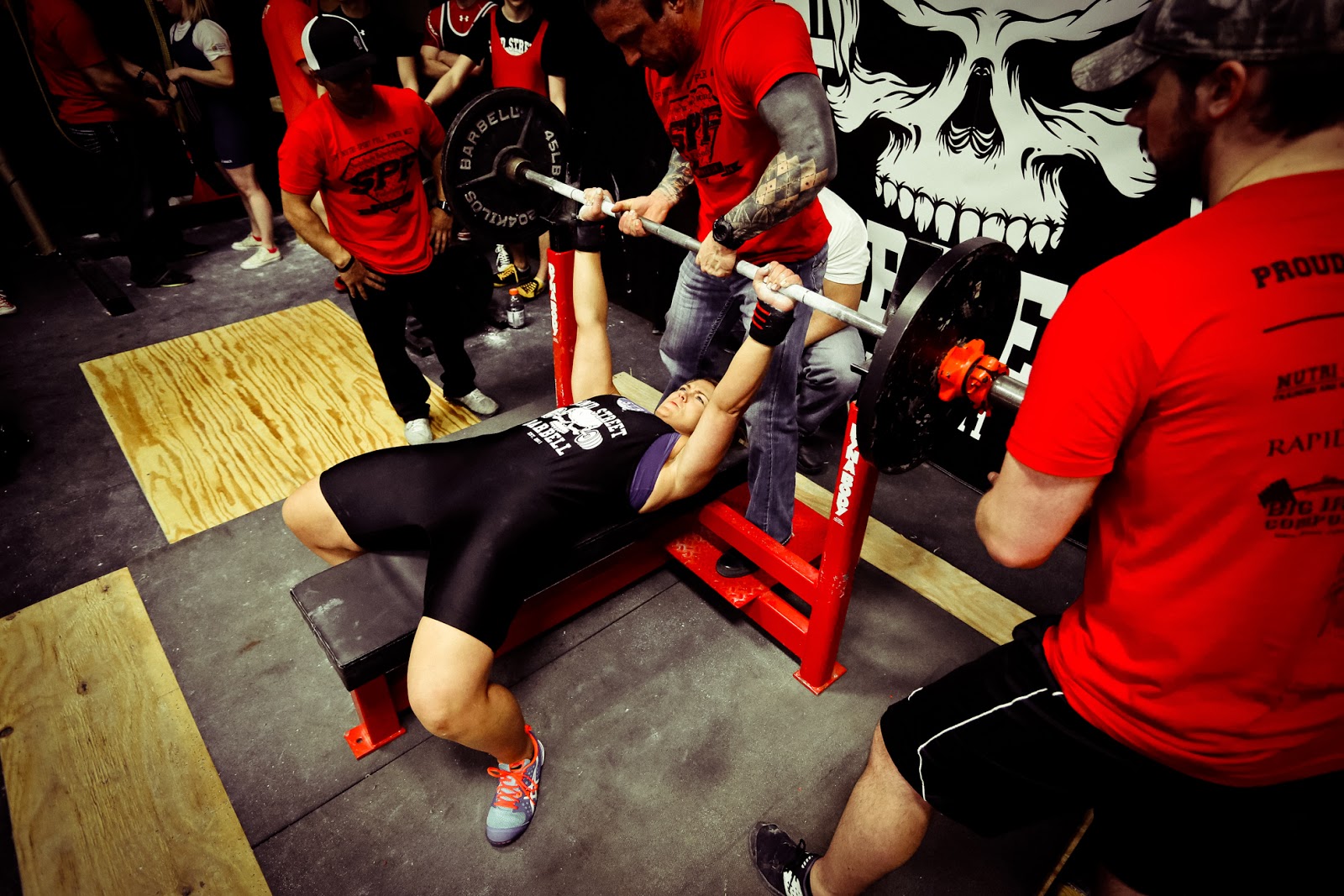 I finished the bench and deadlift going 6/6 and hitting a PR in the bench at 155lbs and finally, FINALLY conquering the 300lb deadlift.  To no surprise, meets are a lot more fun when you hit your lifts.

Looking back at it now, I think the silver lining is that I don’t think I would have gone for 300 in the deadlift if I had made all my squats. My original plan/goal was to hit 285 in the deadlift but by the end of the meet, with a little nudging from others, I said go big or go home and just went for it!

All numbers aside though, I had a wonderful time watching my teammates compete.  Some of them first timers like me and others more experienced.  I’m such a cheese ball but I even feel like I made some new friends and existing friendships grew even closer.

I know first hand the amount of training mentally and physically a lifter must go through to have success at a meet and watching my teammates set new PR’s, earn elite totals or even in a few cases become ranked top in the nation makes me so happy.

This weekend left me only wanting more. I’m more motivated than ever to work on my weaknesses, get stronger and set new goals for myself. I’m so thankful to have a gym and a team like 22nd Street Barbell to call home.

Saying it was an emotional day for me would be an understatement. Tears, smiles, laughs were all a part of it but I wouldn’t change it for the world. I truly believe this will make me a better lifter in the future.

Do you have any questions about powerlifting for Annie? Write them in the comments section below!