Guest post by Tasha: friend, crossfitter, and crazy-good story teller.
*Names have been changed to protect the innocent 🙂

I survived! I survived! I never thought I’d see the day of finishing a half marathon! I signed up for a run I had no interest in doing, and finished. Since finding CrossFit, my running days have cut back significantly. It used to be something I did all the time. My longest distance was a 10 miler (finished in 2 hrs 4 min).

Let’s back this story up to April, when I was working an event – the Kentucky Derby Festival Marathon expo. My company was set up as a vendor there. Across the aisle from my booth is the “Big Hit Half Marathon” booth. I ran their “half of a half” last year (6.55 miles, in 1 hr 2 min). I looked at it all day. It got into my head. It convinced me that I should do it. I told myself, if you can do ten miles, you can do a half. So I went home that night and signed up. It seemed like a great idea … back in April. Keep in mind, I was crossfitting at the time and loving it; my run days were almost gone. I kept telling myself “I’ll run this week” or “tomorrow” or “maybe later this afternoon.”

Life goes on, the schedule gets busy, CrossFit gets fun, and who has time for running? Not me. Especially long distance. Yeah, I’ll give you sprints for a WOD, and I may even do an occasional 5k. But my running days were behind me. I racked up 30+ races in 24 months. Yet, my ass was still chunky. It never made sense.

So *Nancy tries to save the day! She knew the half was a new distance for me, and wanted to be there to celebrate and not let me run it alone. She signed up too and promised to run it with me a few days after I signed up. Cool. This is going to be great. We’ll turn it into a girls’ weekend with 13.1 miles in the middle.

I’ve never dreaded anything more than this half. Ever.
But I have to do it. Nancy has paid, she’s flying down, she’s so excited, and it’s supposed to be a girls’ weekend celebrating my first half. So I kicked into plan mode a couple days before. Maybe I can “get sick.” Maybe I can convince her when she’s here that she’s sick. Maybe I can accidentally trip her and she can’t run. Maybe … I thought of everything.

I told *James, my CrossFit coach, that my goal was to be under 2:30 and he told me that was crazy. He said “That would be like someone who doesn’t do CrossFit to show up to the Throwdown and expect to place. Just go out there and do your best. You can slow down, but don’t stop running.” Makes sense. Well, they say CrossFit makes you better at other sports, a well-rounded athlete. I was about to test that.

The night before the race when I was getting my run outfit together, a wave of insanity washed over me and I was giddy about the race; I was excited! That lasted for about an hour. Haha. But I always got excited the night before a race when I was picking out the perfect outfit and putting all of my gear in place for the next morning. 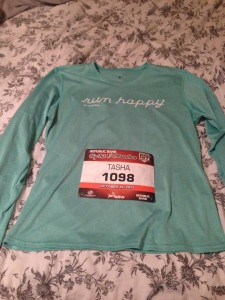 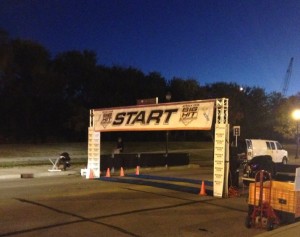 The morning of and it’s 35 fucking degrees outside. FROST is on my windshield, and I’m expected to run 13.1 miles. I walk towards the start line and down two gummy bear-like energy chews. Nancy told me to save the others for on the course. I didn’t use them on my 10 miler, but I figured I’d give it a try. Plus, if I spaced out the other four chews, it would give me something “to do” … other than shout profanity at the fast runners whizzing by me. So I slid the opened package down the front of my sports bra and hoped that it wouldn’t turn into a sticky, gooey mess. (BTW, it didn’t, it never warmed up enough, ha!)

Oh, and I also feared shitting my pants on the run. If this part is TMI, skip to the next paragraph. I usually “go” everyday at about the same time, which if I kept on track would be between miles 4 and 6. So I forced myself to use the porta-potties, something I hate using. I always come out feeling like I need a whole new round of vaccinations. I made myself go. I was in there for so long that Nancy (in her outside voice) said “Tash, are you ok in there?” Thanks, Nancy.

I hate running. Really. Now that I’ve found CrossFit, there really is no need for all that. Take a knee, people, take a knee.

Miles one and two were the worst. I felt like crap, it was cold and I was forcing myself to run slower than I usually do. I knew I needed to pace myself at first. Then I hit mile three and my body loosened up, my breathing was good, and then it hit me: Holy shit, I’m running a half marathon and if things continue to feel this good, I may finish! That’s when I started getting choked up. I didn’t cry, but I got watery and then it fucked it with my breathing. Trust me, running and holding back a cry will make you sound like you have a weird mix of asthma and Tourette’s.

Chugging right along and I can clearly remember in my head seeing the sign for mile 7. That’s exactly when I started to to feel a tingling itch in the arches of both feet. That’s new. Of all the running I’ve done, I’ve never had that. My shoes (Brooks) aren’t new, but not old, I’ve run a few races in them too. Keep going, don’t stop.

I got to the turn around point and passed Nancy on the way back. How did I get in front of her? Wow, I’m ahead of her. That sparked a little surge of energy in me because she’s known for running. Not me, anymore. 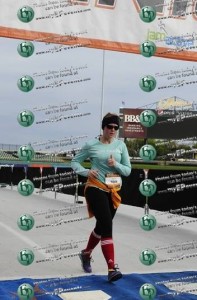 PS: Nancy runs like a damn fool all the time. This race was her 13th half marathon.

Then I could see the finish line. Sweet baby Jesus get me to that finish line and out of these shoes!

Finished! In 2:22! I was so happy to be finished! It was the best and worst (feet) feeling all at the same time. This was race number 38 for me! 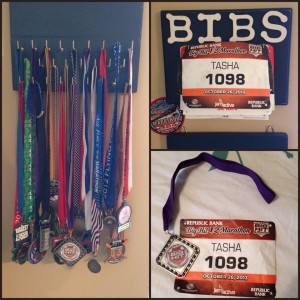 I know that I would not have been able to run the entire time (except for the few seconds to fix my socks) after not running for almost four months, had it not been for the CrossFit training.

We got our medals, carbs, gatorade, and headed to the car. It was cold and we wanted to get in my heated seats. I took my socks and shoes off as soon as I got there. My socks had slipped and gathered in my arches. I was running on the loose fabric, which caused half dollar size blisters on each arch. Fantastic!

Will I ever do it again? Well, maybe 🙂 Now that I’ve proven to myself that I can run a half, and my blisters are better, I can see myself doing it again just to see if I can beat 2:22. However, I will train a some and be better prepared.

We want to know: With what has your CrossFit training made you better? OR, If you’ve run a long distance race, what’s your worst battle scar? Let us know in the comments below!