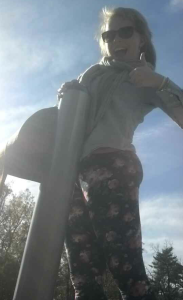 Fitness has always been an important component of my life, though it took me years to realize it. Since I learned to walk, I have danced, ran track, swum, cheered, played soccer, tennis, basketball, hockey… if you can name it, I’ve probably played it. I have also been acting since I was very young, a past time that has always kept me on my feet. However, when I was a junior in high school, I got a particularly bad case of pneumonia that resulted in me being hospitalized and restricted to bed-rest for several weeks. I was out of all physical activities for months, and grew antsy and unhappy. As soon as I was cleared to participate in physical activity, I joined my school Girls’ Ice Hockey team, though I had never played before. It was just the only sport that it wasn’t too late to join, and I was desperate to do something.

When I went to college, I was very lucky because my major required me to take a wide variety of dance classes, thus helping me to avoid the Freshman 15. A few semesters in though, my meal plan changed and I had to start making my own food. Because I had convinced myself that I despised cooking, many unhealthy foods that I had rarely eaten before started to become diet staples, especially since I was a broke pescatarian and felt like I had limited diet options. I also gave into food peer pressure; my friends and roommates would convince me that it was okay to eat unhealthily “once in a while.” That “once in a while” became more and more frequent, and over the next 8 months, my weight rose. Eventually, I was heaviest that I had ever been. I also “stress-ate” my way through summer and fall 2014 as I simultaneously held down three different jobs, performed in four different plays, and dealt with the sudden death of my father in August. Though I was active and decently strong, my mildly strenuous inconsistent workouts could not compete with my overeating habits. 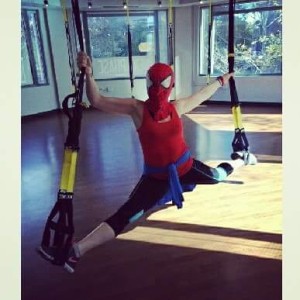 I spent that winter trying to fix myself, devouring as much fitness and nutrition literature as the internet could provide me with. I began to force myself to commit to a consistent exercise routine by way of the YouTube-based at home workouts, school dance classes, and an extra 30 minutes of cardio 5 days a week. I began my poor college student version of meal-prep, and, most importantly, I began to see changes in my body that made me feel proud. I could dance longer and harder. I felt more comfortable trying types of exercise that were not necessarily dance or sports related. I found that I liked using weights. I bought my own kettlebells. I felt really strong…and I loved it.

Now, I am a work-study employee at a fitness studio where I take TRX, Kettlebell, Zumba, HIIT Circuit, Tabata, and Barre classes nearly every day of the week. I work out a minimum of 6 days a week. When I’ve been in shows, I also dance nightly in either rehearsal or performance. I adore broccoli and cauliflower, and I am trying to let myself be afraid to indulge occasionally. I am getting my AFAA Group Exercise Certification, and I am in the process of getting a few other certs as well. I love Strong Figure, the people who created it, and everything that they stand for. I am honored to be a SF Ambassador. 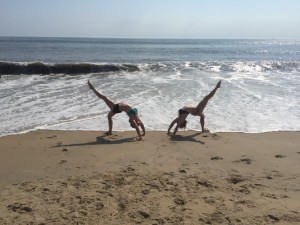