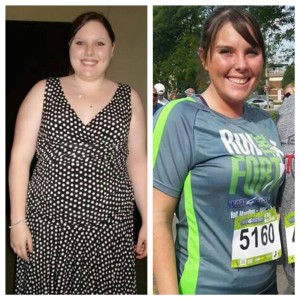 I’m a mother of two, a personal trainer, online health coach, and weightlifting enthusiast! My passion in life is sharing my love for health and fitness with as many people as I can.

My “fitness journey” began in December of 2012, 6 months after I had my youngest daughter. At 5’5”,I tipped the scales at almost 230 lbs, nearly 20 lbs more than I had weighed in my ninth month of pregnancy. A routine check up lead to blood tests and fasting glucose tests. The results were staggering. I had been hypertensive through both pregnancies and, despite my doctors’ assurance that my blood pressure would most likely go down after the birth of my children, it had somehow gotten worse. To make matters worse, my blood sugar tested one point into the “impaired” range, making me technically pre-diabetic.

“We need to talk about your lifestyle.” Those words instantly sent me into a panic. My lifestyle was fine! Sure, my clothes had gotten tighter, and I was more tired than usual, but I had two kids under two years-old! Maybe I had gotten a little bigger, but my body had been through a lot. Pregnancy was difficult. The tests were wrong. I had every excuse in the book, and blamed everyone but myself. After the initial panic, denial, and anger subsided, I realized that I needed to do something, not only for myself, but for my kids.

I started where I was, with what I had, something I always encourage others to do. I didn’t have a gym membership, or really any knowledge of a healthy lifestyle. So I started small. I began with walking, which turned into running. I had heard good things about counting calories, so I found an app that would do it for me. Progress was slow, but I was making progress, so I kept going. I spent my free time researching the best way to lose fat, how to eat to lose weight, and what exercise programs were most effective. I began adding in resistance training with bodyweight exercises. I learned how to calc 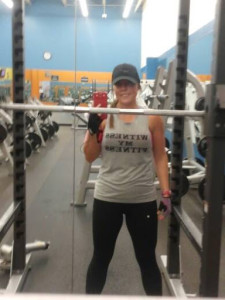 ulate how many calories I should be eating. It wasn’t long before I started a beginner weight lifting program, the point where I really fell in love. Taking control of my health had felt empowering, but it was nothing compared to the feeling of being strong. With every new personal record I found a little more of myself.

By this point my friends and family had noticed my new obsession. By the one year mark, I had lost 80 lbs, but it was more than that. I talked about fitness to anyone who would listen. I was the queen of unsolicited advice. Eventually a close friend and mentor helped me see that fitness and nutrition weren’t just my hobby anymore; they were my passion. He helped me to choose a certification that suited my goals. I threw myself into studying. I passed the exam with flying colors and, within a week, I had a job at a big box gym. That job taught me a lot, but giving a rehearsed sales pitch to anyone who would listen became draining. I stopped getting excited about work. My passion for sharing my love of fitness was burning out. I knew it was time to make a change. I took a huge leap of faith, and I left to start www.vivaciousfitness.com. I’ve lost 96 lbs total, and what I’ve gained is so much more. I feel truly blessed to spend my life sharing something I love with as many people as I can, and helping them change their lives in such a meaningful way!