I’d rather be sweating. 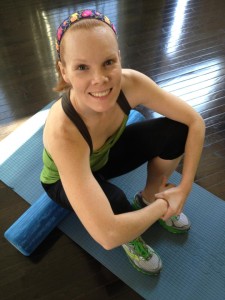 I have been involved in health and fitness ever since I picked up a volleyball in 5th grade. I was an overweight child and was active but never played organized sports. Playing volleyball (and having a growth spurt!) helped me to become the athletic and healthy minded person I am today. Being overweight as a kid, I can definitely sympathize with anyone who is struggling with his or her weight because “I was them at one point.” Kids can be cruel but so can adults.

In 2004 I graduated college and moved to DC where I got into the corporate fitness field and have never looked back. It may sound cliche but my daughter, Addison, is my world and every day she inspires me. She was born in June 2012 with the heart and determination of a fighter. She has inspired me to just be patient, take a step back, breathe, and not be in a hurry. Now, stress and problems at work aren’t that big of a deal to me because the biggest deal in my world is my carefree baby girl at home. I am careful with everything that I do or say when I am around her because she picks up things so quickly. I want to be a positive influence for her. I have stopped criticizing how my body looks because I don’t want her to pick up on that and be influenced by it. Teaching her to eat healthy, whole, fresh foods has inspired me to eat even more healthier than I did because she sees what her father and I eat at every meal.

I have done a lot of things that I have been proud of but  I am most proud of the fact that I have succeeded in such a competitive field. I have been in corporate fitness since 2004 and simply put: I love health and fitness and try to show every person that I meet that they are a strong figure!

Christine manages a fitness center and teaches anywhere from 2-3 classes/day. When she isn’t teaching, she’s lifting weights or running. It all depends on the day of the week. Christine also incorporates foam rolling and low back exercises into her routine. Her daily nutrition usually looks something like this: