If you have ever been to or read about the Arnold Sports Festival then you know there is a LOT going on and a LOT to talk about.  And this year’s ASF 2014 was no different.  Over 200,000 people attended and it was a venue people will be talking about for a long time.

We saw heroic feats of strength…

There were celebrity sightings… 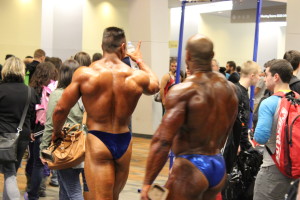 But the one phenom everyone was talking about was 14 year old Maryana Naumova. 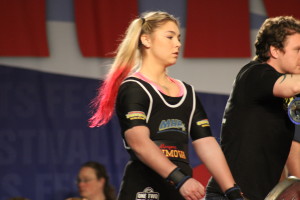 In many was Maryana is just like any other Russian teenager.  She likes her pets and photography and her favorite meal is sushi.  But Maryana is a world record holding powerlifter.  She started powerlifting at 10 years old because she wanted to be like her father.  Her idols are Dana Linn Bailey and Arnold Schwarzenegger.  Her favorite lift is the bench press and not surprisingly, she is pretty good at it.

At just 13 years old she raw bench pressed 235lbs while weighing only 114lbs.

Hours after her lift I saw her walking around shopping at the various vendors and she seemed like any typical 14 year old.  But Maryana is far from typical.  There has never been a girl under the age of 15 in any weight class who has benched as much as young Maryana.

If you would like to read more about Maryana, she did an interview with Critical Bench last April.

This was one of my favorite quotes from that interview (I imagine she has a lot of haters):

What do the haters say to you?

They write nasty things about me such as I use steroids, that my parents force me to do the bench press and I that I’m hurting myself.  These are bad people. 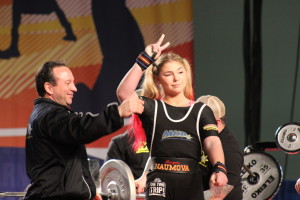 You can probably see why she was the talk of the Arnold Sports Festival 2014.

Here is a 255lb raw bench from Maryana plus other crazy demonstrations of strength: