Take the Challenge, Change Your World: How I became obsessed with Obstacle Course Racing

When my friend Terri asked me back in 2011 if I’d like to compete in the Civilian Military Combine obstacle course race with her, I had no idea that saying “yes” to her question was the quick decision that would forever change my world of fitness. The intense training, the event and overall experience of the race, and the camaraderie I developed during all, has absolutely changed my life.

Obstacle course racing is tough—it challenges the racer’s endurance, speed, stamina, strength, flexibility, and sometimes most of all—confidence and will power. TheWintergreen Adventure Challenge in Wintergreen, VA, challenged my will and my quads. Or maybe my calves during the race, but my quads suffered for days after the event. Seven miles of ski slopes, four hours, and two painfully screaming legs later, I completed the most mentally challenging course that I never knew existed. My typical game plan as I head into an OCR is go in blind. Meaning, I never look up the course beforehand. I prefer to face my obstacles head-on and embrace the challenge. In the Wintergreen race, everywhere I looked athletes were dropping in numbers by the minute. One ski slope? Not bad. Two? Challenging. Three? I’m over it. The fourth? A MILE LONG?! I wanted to quit. Handfuls of people had already done so and several were being carted away by medical personnel on golf carts. But I kept trudging. (Trudging is all I could do by the way. There was zero running in this race.) The actual obstacles—hay bales, rope walls, log walls, slip-and-slide, balloon blow up (yes, a balloon blow up) were not bad at all. But all the slopes? Hell. Misery. On the fourth—the longest and steepest—I remember singing out loud, “Here we go again on our own…going up the only slopes I’ve ever known…” My friend Terri asked how I could possibly be singing and cracking jokes at such a moment as this. But I knew we had to get through the race and I knew we wouldn’t stop. Pushing through to the finish line—especially when so many others couldn’t—that’s the place where I find my drive and my will to succeed. 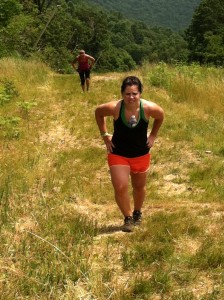 The Rogue Runner race in Warrenton, VA really tested my endurance, speed, my trust in other competitors and my overall confidence in myself. The 6.3 mile race terrain was rough. Steep, rough rocky hill climbs challenged my speed as an athlete and really forced me to be careful of knee and ankle injuries. During mile four, my breathing quickened and my side cramped so badly that I thought I might have to stop. I was forced to a walk, but I never stood still. In mile five my left knee started its familiar “you’re pushing me too hard!” throb. I shook it out and walked whenever the terrain looked too rough, but I knew I just had to finish. In my head I was leading a group of four women who all counted on me to pull through to the finish. Aside from stamina, my confidence was repeatedly tested with challenging obstacles I had never seen before. Peg-wall climbs, zip lines, a balance beam traverse over muddy water and a chest-high swamp trudge forced me to throw fear to the curb and face these challenges head on. This particular race even forced me to place trust in other competitors. I couldn’t get over eight and ten-foot walls without the hand of the random guy or girl at the top ready to hoist me upward, or without the back of my teammate whose squat lifted me five feet off the ground. On suspended tree ladders I could have been catapulted though the forest if it weren’t for the cautionary efforts of those in line behind me who lifted me slow-and-steady to new heights. “Watch your next step! The wire is slick!” I heard from my teammate Dana in front of me. Someone was always helping me and as cheesy as it sounds, the bonds of friendship only grow closer from such thrilling experiences. 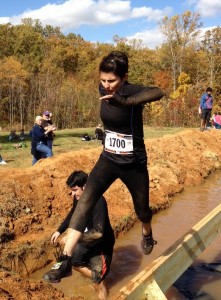 While some races pose mental challenges, and some stamina and speed, the one race that I’ve found to challenge every core of my being is the obstacle course designed like none other: The Civilian Military Combine. The CMC is in a category of its own because it begins like none other: each competitor must compete individually in a CrossFit-style “Pit” before being able to even begin the obstacle course portion of the race. To give you an example of how physically challenging the Pit is, the first time I completed it, my quads cramped instantly after its eight grueling minutes. Death is what the competitor looks and feels like before starting the course—which is anywhere between four and seven miles of military style obstacles. Over walls, under walls, crawling up and down dark tubes, rope climbs, carrying sandbags and sand buckets, running through tires then carrying the tires, slicking knees open while sliding through rock-filled mud crawls—barbed wire only inches above the ground…mental? Yes. Physical? Oh God, yes. Climbing over the last wall and hurling yourself over the finish line? Indescribable. 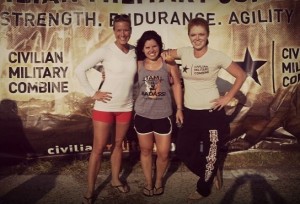 I’m addicted now. I can’t stop. Thanks to Terri and her one idea to “have a fun Saturday morning workout by running an obstacle course race,” we are now part of a sponsored team with three top place finishes under our belts and looking for more. With four races down in 2012, what will 2013 bring? More wins? It’s possible. More sponsorship? I hope so! More challenges? You bet! But most importantly—the one thing I know for sure—health, friendship, and confidence are in store for me, my team, and all those who take on new challenges. This is what I’m after, it’s what I’ve gained, and so far what I’ve found  is pretty damn good.