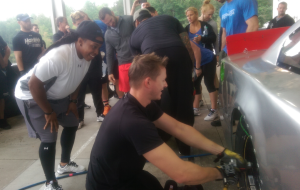 WASHINGTON, DC (September 18, 2014) – As one of the fastest teams in the National Pro Grid League, the DC Brawlers are excited to be in Charlotte, N.C. – the home of NASCAR – to prepare for their Quarterfinal match vs. the LA Reign onSept. 23.

Fresh off their win against the New York Rhinos, the undefeated Brawlers arrived in Charlotte and headed to Hendrick Motorsports to visit the 11-time NASCAR Sprint Cup Series champions and indulge in their need for speed.

After a tour of the Hendrick Motorsports race shops, featuring cars for star drivers Jimmie Johnson, Jeff Gordon, Dale Earnhardt, Jr. and Kasey Kahne, the DC Brawlers met the pit crew athletes who aim to perform 11-12-second pit stops on the No. 24 Chevrolet driven by Gordon.

While the sports are different, there are a lot of similarities between the athletes and teams.

“The precision is very similar to what our athletes do,” said Coach Justin Cotler after watching the No. 24 pit crew at work.  “Their team is similar to ours in the amount of time and effort we put into practice and looking at every movement.  The quicker they are on a pit stop, the better position they put their driver.” 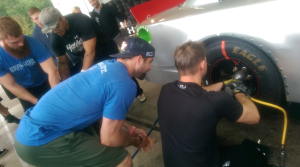 “We also noticed similarities in the specialty areas.  They have bigger guys that carry tires – one was a former linebacker.  And the guys with the quick hand-eye coordination are the changers.  Again, that’s very similar to our sport where specialties such as gymnastics or heavy-lifting can be used strategically on our team to win matches.”

Rear-tire changer Chad Avrit and front-tire carrier Dion Williams showed the Brawlers how to efficiently change a tire and gave a few athletes a try.  Amy Dracup surprised the crowd when she hit all five lugnuts at impressive speed for a first timer.  Tim Paulson was the strongest jackman on the team, learning how to lift the race car in one pump with the jack. 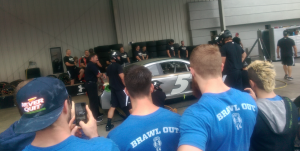 “This was a really cool experience,” said Lindsay Menerey.  “I really appreciate what goes into a pit stop a lot more now!  I know Hendrick Motorsports and NASCAR gained a few more fans today and we’re looking forward to hosting some of our new friends from the race team at our match next week.”

The DC Brawlers will take on the LA Reign in the Quarterfinals at Bojangles Coliseum on Tuesday, Sept. 23 at 8 p.m. ET.  Information and tickets can be found at www.npgl.com/schedule or www.bojanglescoliseum.com. The match will be broadcast live on NBC Sports Network (NBCSN).

For more information on the Brawlers, visit www.dcbrawlers.com.

Grid is the world’s first professional spectator sport with co-ed teams that compete in strategic athletics racing. It’s a mainstream sporting league that is fan, TV and sponsor friendly. Each two-hour match features two 10-person teams (5 men, 5 women, one of each being over 40 years old) going head to head in 11 fast races. Grid races are easy to follow and are played with pre-set rules and unlimited substitutions designed to force teams to strategize.

About the DC Brawlers

Founded in April 2014, and located in Washington, DC, the DC Brawlers is an official team of the National Professional Fitness League. The team embodies the core principles of integrity, toughness, ferocity and strength. Featuring both male and female functional fitness athletes, the DC Brawlers seeks to inspire the fight within.  Follow the DC Brawlers on social media for regular updates: Facebook.com/DCBrawlers, Twitter.com/BrawlersDC and Instagram.com/dcbrawlers.