Because my job is freaking awesome, I got the opportunity to spend the weekend in New York City this past weekend. This was my very first experience in “The Big Apple,” and OHMYGOSH did I have a blast!!!

Now, even though my trip was work-related, that didn’t mean I did not do some sight seeing, shopping, and have some fun! In fact, I was able to do SO much more in my short little visit than I even expected. Let me highlight my favorite parts of the trip first:

I experienced Dim Sum for the first time! I didn’t really know what to expect but had been told it was awesome. It was! I’ve had a lot of “Americanized” Chinese food over the years but this was completely different. I didn’t feel all bloated and sodiumed up after leaving the restaurant and the food was so fresh and just, well, GOOD! I tried about 4-5 different food items and there wasn’t a thing I didn’t thoroughly enjoy. There was one weird dumpling-type item–imagine a soft, chewy, donut-type fried sugary, almost dessert-ish pastry. Then imagine it filled with sausage. Yep, that’s the only way to describe it and I’m still not sure what it actually was, but it really was delish!

Galleries may not work properly on some mobile devices but you can click on the pics to view — sorry for the inconvenience.

came at the hands of Kaseedee who came into the city to show me around. After sushi and $3 Lichee martinis (#bestever), we hit the streets of NY with a mission of snagging selfies in every major location within walking distance. We visited Grand Central Station, the Empire State Building, the Chrystler Building, a park by the water (I can’t remember its name), Time Square, and that’s also where we found the infamous M&M store. I probably shouldn’t have even gone in–considering M&Ms are one of my favorite candies of all time (seriously, I won’t deny gifts–wink wink), but it really was just flat out, so cool.

might have been my favorite just because of the really cool buildings. And gardens. And parks. And festivals. I mean, there’s just ALWAYS something going on! And apparently there’s really good shopping in the Flat Iron district but I don’t think I went deep enough in. Looking back, I probably should have gone further instead of just stopping once I got some cool pics, but I guess on the positive side I did save some money! I didn’t even dare venture in the “Diamond District.” Staying in the “Garment District” was hard enough when walking past dress shop after dress shop after dress shop. Totally cool…but good gosh I could never shop there! BTW, can I just say that I didn’t even know that the city was divided up by these cutsie “district” titles? I really like that.

I want to wake up in a city that never sleeps…

If I make it there, I’ll make it anywhere…

One of the coolest things I did was working out with the famous Reebok CrossFit 5th Avenue. I got up early to do the workout–having no clue what the workout was. When I got there, I realized it was a “Hero Wod” meaning a workout done in honor of a fallen soldier/military person. This hero workout was in honor of Army Sgt 1st Class Daniel Crabtree who was killed in Al Kut, Iraq on Thursday June 8th, 2006. “Daniel” is 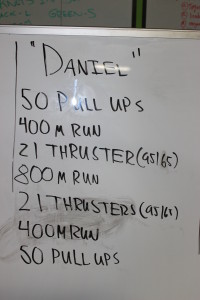 After introductions, the two coaches led us to the NY Public Library (this is before I toured it) where we did the warm-up! I mean, how freakin’ cool is that?! Tourists were taking pictures of ME like I was just one of the crazy NY’ers working out on the steps of the library that day. Ha! I loved it. I even heard some people whispering in the crowd, “this is just their warmup!” Again, loved it. We were divided up into 5 teams of 5 people and treated the warm-up like a relay race. Each member ran up the stairs of the library and back, then we repeated the run adding burpees and squats over the next few rounds. We then lunged to the end of the block and ran back to the box–which is in the basement of one of the corner buildings on 5th Ave. So that makes it even cooler than it already was before.

I think one of the most interesting parts of the whole experience was trying to run with so many people on the street. If it weren’t for everyone wearing nanos and Reebok gear, you’d never know who was working out or who was trying to catch a cab.

I will have to say, I was pretty impressed with my workout performance. I ended up doing all 100 pull-ups without assistance. I thought I’d either be the last one finished or have to move to rings or bands–and not that there’s a single thing wrong with that–I just have never attempted that many pull-ups at once! I’m glad it was broken up into two sets or else I’d have never finished them, but I did and I’m pretty ecstatic! I didn’t even rip my hands! Well, I did draw up a little blood, but nothing too crazy. I think the Wendler powerlifting strength plan that I’ve been doing is really helping me. I do a lot of auxiliary pull-up work and it’s the only reason I can think that got me through! But man, what a feeling to complete THAT workout in under 25 minutes in NYC?! Just seems way too cool for this southern chick.

And don’t forget the whole reason I came to the city in the first place–the mobility wod MOVEMENT and MOBILITY Cert!!! I’m releasing a separate post later this week on that so make sure you subscribe to strongfigure so that you don’t miss out! (It’s FREE and in the right side bar on your screen.) Here’s a few pics of what’s to come:

So, I want to go back to New York! Those of you who have been, when I go back, what’s the one thing I should see/do that I didn’t list above? Tell me below!