There are not a lot of women in the sport of powerlifting, more than previous years and the numbers are growing quickly. Unfortunately, to the complete opposite of the lifting spectrum, many women are still so fearful of “bulking and looking manly” that they don’t get involved with lifting weights at all. This is so incredibly far from true, and these thoughts often cause too many women to miss out on a sport and a lifestyle that is amazing and rewarding in more ways than I can describe. I couldn’t possibly begin to put into words–as I’ve  tried so many times–how much I love lifting. All I will say is that if you aren’t lifting, YOU ARE MISSING OUT!!! Honestly, if you aren’t doing anything active, you are missing out on a host of health benefits. A lot of sports are very rewarding–but because I’m a powerlifter, I chose to write about this one.

I interviewed my coach/friend and also a professional powerlifter, Gracie V. Since my first powerlifting meet, Gracie has supported me. We connected through facebook when I first began–which is after I watched a meet on Ustream and saw Gracie–instantly in awe. I added her to my friend list, along with several other amazing women that I saw. And when I posted about make-up one day–Gracie’s other specialty–she responded and I was so ecstatic! Later on, I signed up for a meet and she commented on almost all of my updates about training and prep…encouraging me the whole way…..it was so great and inspirational to have someone I looked up to reach out to me like that. And she has continued to offer me her support since then, and has helped me feel like I belonged…for once.

Here is her bio on how she got into the sport, including how she trains: 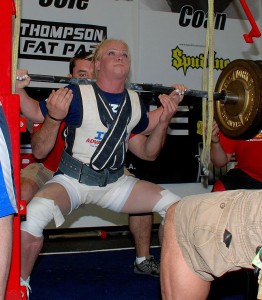 “In the summer of 2009 I was unhappy with my body and was on a mission to change that. I was intimidated and afraid of going to a co-ed gym; I didn’t even know what a dumbbell was. So I joined Curves. It worked ’cause I worked it. I went in everyday on my lunch break to run through the circuit..all the other women were mostly 40-60 years old. I felt a bit out of place but continued to stick to my plan. I saw great results. But after losing 20lbs, I plateau’d and decided I needed something a bit more serious, so I joined a health club (Goodlife Fitness) and hired a trainer. After attending my first bodybuilding show I decided I’d found my sport! I wanted to look exactly like those women on stage. So with the help of my trainer I started to lift heavier weights. Shortly after, I met a powerlifter in the gym, Barry Antoniow, and he taught me to bench press. We started to train chest together on Wednesdays. He would tease me about wanting to be a bodybuilder and convinced me to hit up a session with his powerlifting team. I went in on a Saturday and they were benching in their bench shirts..I was a little intrigued by this. I hopped into the girls group and was benching raw what the girls were hitting in their shirts. For the first time in my life I felt “good” at  something. After leaving that day I planned on switching up my training and finding a coach, but Barry told me I couldn’t call myself a powerlifter until I competed in a meet. Two weeks later I was training at a powerlifting gym and signed up for my first meet where I went 9/9 and qualified for Provincials. That was November 6th 2010. (Raw 148lbs  198/148/258)”

Who did you look up to, or who inspired you? 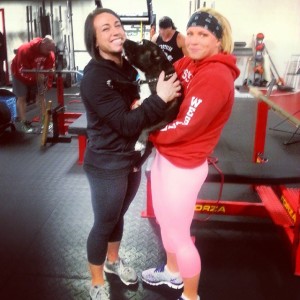 “Mostly Laura Phelps-Sweatt. I would watch her videos everyday in complete awe. In my first year of lifting I had the pleasure of training with Shany Gilbert (625/425/525 @181); I looked upto her so much. Since I saw her lifting massive amounts of weight in training, I knew it wasn’t too farfetched. If my training partner at the time was a 300 pound squatter, chances of me squatting 314 in my first equipped meet would most likely not have happened. We are very limited to what we see others do. For example;if the strongest lifters in a gym are deadlifting 600 pounds, it’ll probably be a long while before someone hits 700. But when someone around you has already done it..there’ll be a few more 700+ pullers in no time.”

What do you love about powerlifting?

“Being a recovering addict, I was constantly searching for something outside of myself to fill the void, anything to get away from myself. I found powerlifting when I was 4 years clean. I feel like it is a huge part of my recovery and has played a great deal in me staying clean. It’s my outlet. I love being able to go into the gym and turn everything else off. It’s better than I remember the dope ever being.”

Were you ever intimidated to train with mostly males and be in a gym filled with men? 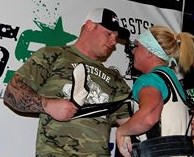 “My whole working/adult life I worked in male dominant trades and growing up a part of identical triplets, there wasn’t always enough attention to go around. So being the only girl in the shop or in the gym usually meant that I got special treatment. Not going to lie, I liked that. Having only guys as training partners made me even more comfortable lifting heavy weights–strong spotters. Today all that is different; I wouldn’t trade my female training partners for anything or anyone. They push me harder than any coach has ever before.”

Tell me about a time that you persisted to train even though you should have, or most would have, thrown in the towel: 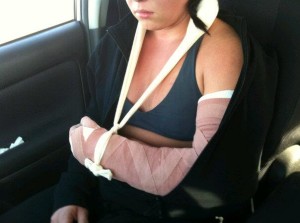 “In October 2011 I broke my left humerus while attempting a 300lb bench. Arm basically snapped in half. As much as I hate to admit it, I was afraid to bench 300 lbs again and tip toed around it for a while before my fiance/coach AJ Roberts (2x WR Holder at 308) put me in my place. I still haven’t done it at a meet, my best is 290 (last August), but I have handled it several times in the gym since then.”

What would you say to a beginner?

“Stick to the plan and never miss. I learned this very early on as a beginner and it has shaped the athlete I am today.  Since day one I’ve had a plan. I plan out all my training cycles, even my “off-season.” All my warmups and attempts are chosen before hand for every meet I’ve competed in. There will always be someone stronger than me, therefore I can only compete with my own numbers. When I get caught up in what others are doing I lose myself and lifting becomes work and stops being my passion. Even if I’m in a money meet and close to someone’s numbers, I always like to stick to my plan.”

What do you do for a living and how do you make time to train?

“Before moving state-side I worked in the car business for about 5 years. Mostly as a service advisor then at the end was doing F&I. I moved to Columbus to be with AJ; we lived there for a little over a year before he retired from powerlifting and we moved to sunny San Diego. I haven’t worked since moving to the states, but recently started a little beauty business “Beauty Bengal” where I do makeup, nails & brows. My makeup services are mostly geared towards female bodybuilders for contest/stage looks. 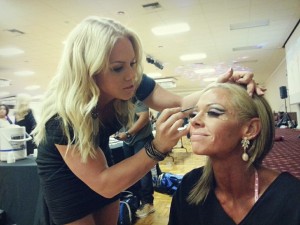 Training comes first–it’s the other stuff I make time for. I train with my team at 4pm Monday, Tuesday & Thursday then 9am Saturday. Recently we have formed a Tuesday morning crew so I go into squat at 9am then come back to help coach the guys at 4pm. Usually I’m in the gym for 2-3 hours.”

“I would have them attend a meet and tag along to a training session to see what it’s all about. Usually it’s love at first sight.”

What or who are your favorite resources to learn about training or education in the sport?

“Louie Simmons. Lou has dedicated his life to this sport. Through of his own experience and that of his lifters, he’s developed a system that continually produces champions–both inside the walls of Westside Barbell as well as outside with those who follow his teachings. I always look forward to reading the articles he writes monthly in Flex Magazine. He has a special place in my heart and I love going back to visit him. Even just sitting next to me while eating breakfast a person can learn SOOO much! He is a wealth of knowledge.”

What would you say to someone interested in powerlifting but too scared to compete?

“You aren’t a powerlifter until you compete in your first meet, #toughlove. After they do it, they ALWAYS thank me! This sport can be for everyone. The only requirement for membership is a desire to get better! Once you step on that platform, everything changes. Your purpose in the gym becomes so much more! The wonderful thing about powerlifting is that there is always another meet. Give yourself a break and try it.”

There’s not a lot of women in the sport of powerlifting but it’s growing quickly; how can a new lifter who likes to be respectively competitive stay in the right track to success?

“Make a plan, believe in it and stick to it. Surround yourself with positive people. All the successful people I know in this sport believe in their programming 100%. I think you have to put all your eggs in once basket and commit to your plan!”

Note from April: If you are a crossfit athlete I would also like to recommend you to check out CrossFit Conjugate run by Laura Phelps Sweatt and husband Shane Sweatt.

Sam Briggs, the winner of the 2013 CrossFit Games, trained at Westside with Gracie V.

If you are a woman interested in hiring Gracie for Powerlifting programming, you can contact her at theottawastrong@gmail.com or www.facebook.com/gracievanasse.

Also, Gracie and fiancé AJ teach CrossFit Powerlifitng Traning courses! Considered  to be the best method out there for strength training, you can learn how to implement the Conjugate Method and how to be the strongest in the competition. There have been a lot of programs popping up lately and I would have to say that Westside is definitely the best side for any serious lifter. To check the schedule of seminars in your area, check out CrossFit Specialty Certs. There are also many webinars you can learn from on the Westside site as well!

If you are looking to connect with several hundred other lifters using the Conjugate Method, check out the free Facebook page: Conjugate Strong. 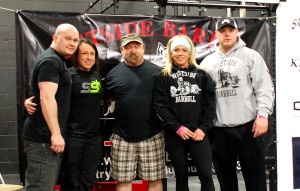