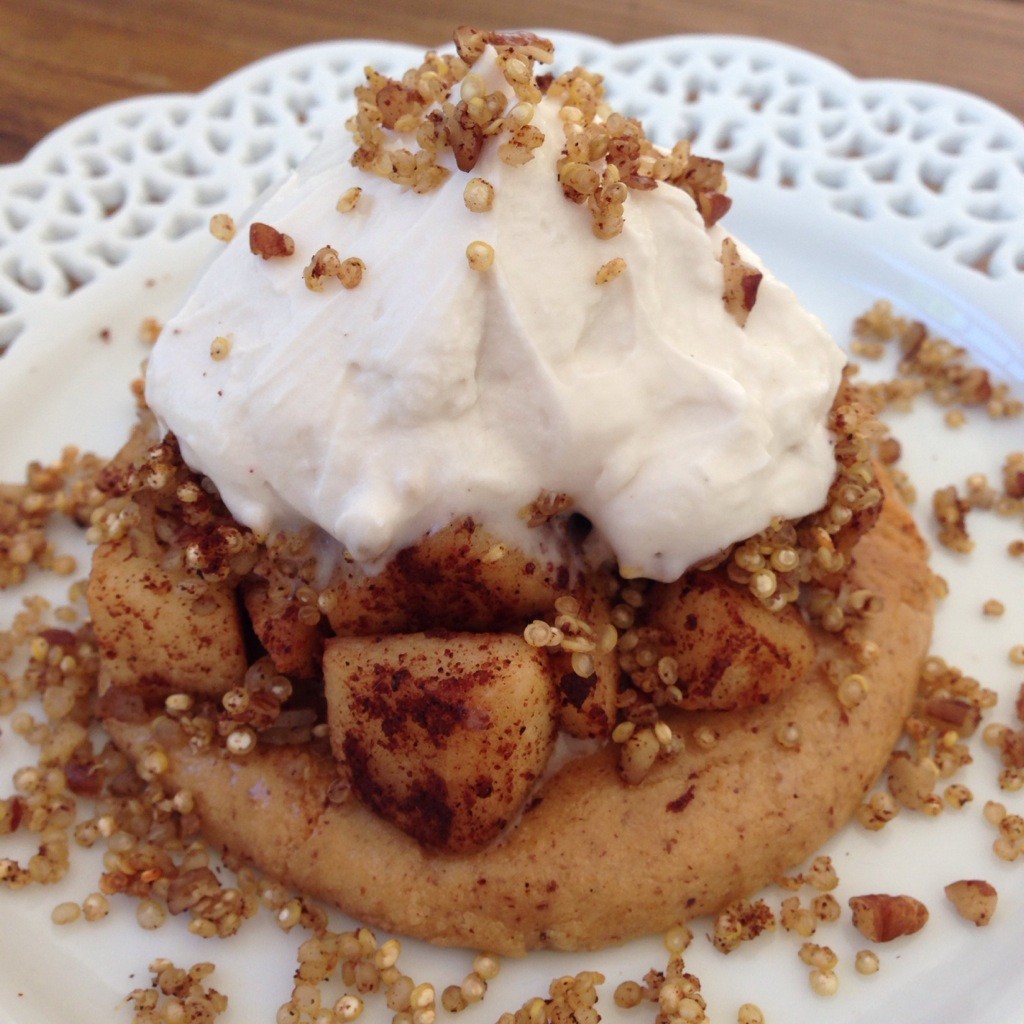 Last month I was lucky enough to not only win the Ambassador of the Month contest from Strong Figure but to also win a Strong Figure tank top from Melissa at Fit Girls Rock.  My prize for winning the Ambassador of the Month contest was a box of Quest Bars.  Believe it or not, I have never tried Quest Bars before.  Hopefully I didn’t lose any points with you by admitting that, I promise to win you over in a minute once I reveal the recipe. 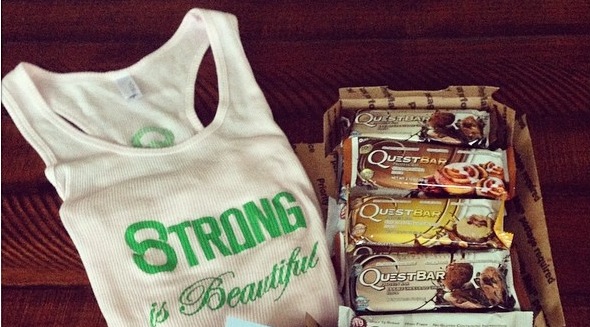 Isn’t the tank adorable? I wear it all the time! Oh and do you see all those Quest Bars? I was told I could mix and match the flavors but I really had the hardest time deciding what to pick! In the end I chose Double Chocolate Chunk, Coconut Cashew, Chocolate Peanut Butter and Cinnamon Roll.  Once I received them I could hardly wait to unwrap each one to see what all the hype was about.  Every bar I tasted was delicious but when I tried the Cinnamon Roll a recipe idea immediately popped into my head and this delectable dish was born!

Preheat the oven to 375 degrees. Start with the crumble because it takes the most time.  Even better if you can prep it the day before which will make assembling this dish a bit easier and you can enjoy it for breakfast.  Also, the amount of quinoa called for in the ingredients is a lot more than you will actually need so you can put the rest aside and use it for other dishes 😉

To make the crumble: Bring 1 cup of water with the 1/2 quinoa to a boil.  Once boiling, reduce and simmer until all the water is absorbed, about 10 minutes.  Remove from heat and let cool for a few minutes, making sure no water is left.  Once cool, add pecans, coconut oil, cinnamon and nutmeg.  I didn’t measure for how much of each spice but don’t be afraid to sprinkle the cinnamon.  Evenly spread the mixture on a parchment lined baking sheet making sure that the mixture is flat.  Bake for approximately 20 minutes, checking to make sure it doesn’t burn.  It’ll be crunchy once it’s done. Remove and let cool.

To make the filling: Peel and chop up 1/2 a Fuji apple.  In a small pan heat coconut oil and add chopped apple.  Sprinkle with cinnamon and nutmeg and sautee until apples are soft.  Remove from heat and set aside.

To make the “crust”: Microwave the Quest Bar for about 8 seconds so that it is soft and mold it into a pie shape.  Place in a baking safe dish and bake in the oven (I did it on 375 since I prepared it at the same time as the crumble) for about 8 minutes. Remove and set aside.

To make the whipped topping: Separate and drain the can of coconut milk (save the liquid for smoothies).  In a chilled bowl whip coconut fat with vanilla extract and stevia until fluffy.  Place in the fridge for a minute while you assemble the dish.

To assemble: Take your warm Quest Bar crust and place apples on top, then sprinkle the crumble over the apples.  Remove your whipped coconut cream from the fridge and place a dollop on top of the pie.  Sprinkle with more crumble and savor every bite! Seriously, tastes just like apple pie crisp but only better and way healthier for you! Just so you don’t have to scroll to the top to see the deliciousness, here it is again: 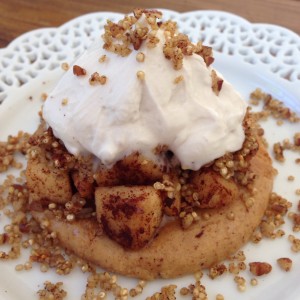 Hope you enjoy! 🙂 You can find more healthy, gluten free and sometimes vegan recipes over at my blog, TheFitFoodieMama.com.  Thank you to Strong Figure for letting me share!