This past weekend I attended the Arnold Sports Festival in Columbus, Ohio.  I watched over 20 different sports, met amazing people, ventured through 800 different vendors, and had an all around amazing time.  But when Steph asked me what my favorite part was — my answer, Strongman.  And strongwoman to be clear.

I have been skinny most of my life.  It is my nature.

I have always struggled to be strong.  I have spent years training; I have battled through herniated disks, tendonitis, and shoulder tears; I have taken many many supplements; I have read books, blogs, and magazines; I have watched movies; I’ve attended training seminars; I’ve talked with strongmen, bodybuilders, crossfitters, powerlifters, and gireviks; in a sense I have done it all with one goal in mind – to get stronger.

Because it is important.  Throughout history, man has survived and evolved based on just a few attributes: intelligence and strength have likely been the two most important. In 2014, neither virtue is as useful as it once was.  Today in America, a weak idiot can survive just fine.  Put the skinny moron in a Papua New Guinean jungle and he won’t last a week. Civilization has created a society that allows all to survive, regardless of intelligence and regardless of strength. The weak idiot would have died in past societies. It is fair to assume that evolution would have wiped out the weak and stupid by now, but simply look around at the epidemic of men wearing skinny jeans and 6 feet tall models weighing 100 lbs, or an episode of Jay Leno’s popular Jay-Walking; and you will realize that there are still plenty of stupid and plenty of very weak people living among us.

The short answer is:  evolution DID do its job.  We have just created barriers to both of these once essential attributes. For the purposes of this article and this audience, I want to focus on the attribute of strength.  Why have so many of us ignored our potential to be strong?

In America, we have created the stereotypes that the smart are weak and the strong are stupid. Seemingly, if these stereotypes are correct, then the act of acquiring strength would make one less intelligent.  And in our society, if we can only be smart OR strong, then most of us will choose smart. And as moronic as the above inverse correlation is, many of our “smartest” believe this. Or perhaps, they just WANT to believe this. Because like me, they are naturally skinny and strength is a hard attribute to acquire. And the thing is, it is human nature to discredit what is hard to acquire. And it is human nature to think US is better than THEM. By this logic, if I am weak then the strong must be worse. Clearly this is asinine. So we have artificially created a belief that strength and intelligence are incongruent. Anecdotally, we all know this to not be true. We all know someone who is both strong and smart. Empirically, I have never seen a legitimate study that shows strong people are stupid OR stupid people are strong. Genetics actually points to the opposite. If someone were to be genetically inferior, then they would likely be both weak and stupid. I have been a teacher for 12 years and often the smartest students are also the most athletic students.

And insofar as this is true, then shouldn’t we wish to acquire both? So where did we go wrong? Our society has created entire institutions based on the acquisition of these two virtues. We have created compulsory schools consisting of both academics and physical education. We have celebrated genius and we have celebrated strength. So why are we seemingly weaker than ever? We know more about strength acquisition today than ever in human history, but men today are on average weaker than men were just 50 years ago. 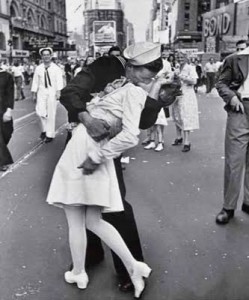 I play poker with a group of men just one generation older than mine. All of them have stronger handshakes than my friends of my own generation. 65 year old men are stronger than 35 year old men? How can this be? The simple answer: priorities. Society has allowed us to put a low priority on strength. We no longer need to travel the country side, kill our own food, defend our families, or carry our own fire wood.  Today, we sit on soft couches; eat processed crap, with locked doors, in climate controlled homes. The 65-year-old men I play poker with still do work, they still open jars, they still change their own oil, they paint their own house, and they move their own furniture. Increasingly in America, men are outsourcing this work to technology, gadgets, and to the small segment of strong people who we probably deem stupid.  I believe we call them the working class. Is strength no longer important? Bull shit. It is human to be strong. We have evolved to be strong.  So get off your couch, put the Doritos away, and lift some damn iron. 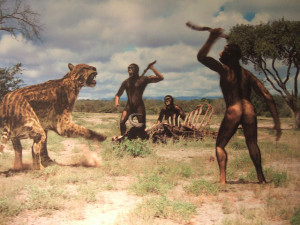 So why do I lift weights, fight through injuries, and eat 6 times a day?

Early man walked the land hunting and gathering.  And physical strength allowed him to succeed. But somewhere along the way, a few skinny guys got together and decided we should live in this perfect utopia where we no longer get bullied, where we are valued for our minds (only), where chicks think we are attractive. I say to those skinny bastards, get over it and do some work. You are not attractive. After thousands of years of mating for superior genetics, women find attraction in broad shoulders, strong legs, and round muscular asses. The flat ass is a sign of weak genetic stock, and that you cannot provide nor protect. Us skinny folk need to accept the fact that the flat ass is not sexy. I’m sure the same folks who created the myth strong men are stupid are the same people who invented the skinny jean.  There is nothing attractive about this:

How the hell did weakness become hip? Who decided this? Picture a hipster in your head. Is he skinny? Does he have a flat ass? Is he wearing a scarf in September? They already ruined flannel, don’t let them ruin physical strength. 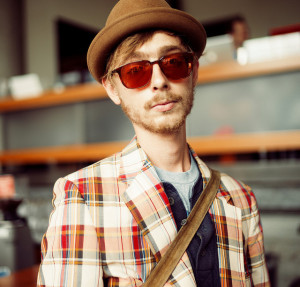 In the days of early man, alpha status was determined by physical dominance. Not an unshaven face, not ironic tee shirts with spindly little arms dangling from un-developed torsos, not conforming to non-conformity. How is that for ironic you smug, weak, little little man. No, the alpha was determined by being intelligent and being strong. But today, at least in adult society, the weak have begun to bully the strong. They mock grunting in the gym, they disapprove of meat eating, and they degrade athletic feats of strength as barbaric and immature. They have become the elite. They are more civilized, more intellectual, more moral. An entire sub-culture is creating a myth that muscles are inferior. And that lifting a piece of iron is moronic. But this elitist culture is unhappy. They are spiritually unfulfilled and they feel sick. They will never admit this, but we all know it to be true. We can see it in their faces, hear it in their words, and feel it through their lifeless handshakes. They are sad. I know because when I don’t workout I become one of them. I feel weak. I feel soft. I am sad. We also know this to be scientifically true. The University of Ghent did a study that showed sedentary people were more likely depressed.

The Iron is the best antidepressant I have ever found. There is no better way to fight weakness than with strength. Once the mind and body have been awakened to their true potential, it’s impossible to turn back. — Henry Rollins 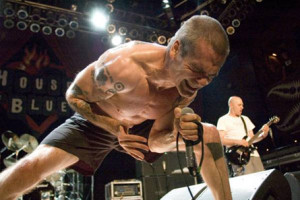 So if you want to improve your life, put getting stronger near the top of your goals.

Stay tuned for more from the Arnold Sports Festival 2014, including our favorite events and products from the weekend, plus a 14 year old girl who bench pressed 290lbs (and she was under 150lbs).