I read entirely too much crap, especially when it comes to nutrition.  In one of my recent crap reading stumbles I came across this article, 10 Things I Wish I Knew Before I Went Vegan, and it made me think I should write an article titled, 10 Things I Wish Vegans Knew.

1.       Your Guru’s Are Wrong. One name that comes up a lot when you read vegan literature is Dr. John McDougall.  Everything this guy stands for drives me crazy – he has a book titled The Starch Solution for God’s sake.  I would think that was enough to discredit him but if you need more you should read My Escape from Vegan Island by Mark at the Daily Apple, a nutrition guru who knows a thing or two.  Mark braved a McDougall health retreat and reports back his findings.  Here are the highlights:

For those of you who regularly read Mark’s Daily Apple, can you imagine him sitting idly while watching the misguided overweight people piling their plates with breads, pastas, and desserts?  He actually referred to it as a “type 2 diabetes epidemic in the making.”

It is a good read if you have two minutes to spare.

2.       You may become nutritionally unbalanced.  It is common for people following a vegan diet to suffer from fatigue, hypo-thyroidism, adrenal fatigue, and anemia.  The case study of runner and personal chef Devon Crosby Helms is a great example.  Helms felt great for the first 6 months after becoming a vegan but the unbalanced nutrition began to catch up with her and eventually her doctor diagnosed her with hypo-thyroidism and anemia.  The truth is, getting all of your protein from a few small sources is fine for the short term but eventually you will need a greater variety of protein sources.  Clear throat…meat.

3.       Veganism makes you skinny fat.  I swear my boy Reep came up with the term “skinny fat.”  He was using the term in the mid 90s to refer to the JMU guys with no muscle that were flabby yet still appeared skinny in clothes.  The term seems to be everywhere today.  In fact, it was even used in the Mark’s daily apple article mentioned above.  Well that is what veganism does.  Vegans suffer from protein malabsorption. The depletion of protein will lead to the depletion of muscle.  And the loss of calories from protein will often be replaced by calories from carbohydrates.  This creates a two part problem both of which leads to more fat.

Any extra carbohydrate is converted to glycogen (a source of glucose and reserve energy stored in the liver and muscle tissues of humans and animals), or fatty acids, which are later stored as body fat.

So the loss of muscle and increase of fat makes you “skinny fat.”  It is true most will lose weight following a vegan diet – muscle weighs more than fat so when you lose it you lose weight, but who wants to be skinny fat? 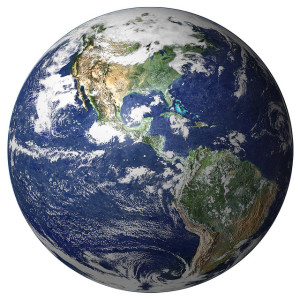 Vegans are destroying our environment.  Ironic, since so many of them are hippies.  Vegans often substitute meat with over processed foods that A.) require a tremendous amount of energy to produce and B.) often come from very far away.  I would say the vast majority of the food I eat comes from less than 50 miles away and I am not an environmentalist; that is just how I eat.  I like meat and vegetables.  It is simple, most of the meat and vegetables I eat are locally produced.  How many places have locally produced tofurky?  Think about all the fuel and exhaust it takes to have that tofurky delivered to your grocery store.  Most quinoa (the holy grail of protein for health conscious vegans) is produced in Peru, Bolivia, or Ecuador.   Crap, those places are far away.  Stop killing earth – eat meat!

5.       You are not better than us. In fact, you may be worse.  Imagine telling a starving kid in Malawi you don’t eat meat.  No I think it’s unhealthy…it’s inhumane… You know what is unhealthy and inhumane?  STARVING!!! Get off your elitist soap box and have some chicken with the rest of us. 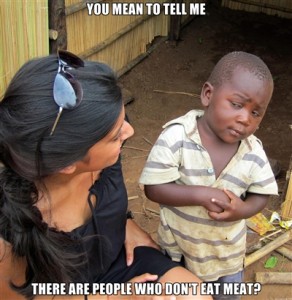 6.       You are less athletic. Most people are the body types ectomorphic , endomorphic, or some combination.  A very small percentage of the population is mesomorphic.  Mesomorphs are the few people out there that can merely look at weights and gain muscle, plus they can eat whatever they want and not get fat.  If a mesomorph were to follow a vegan diet they could potentially still have muscle.  Vegans love to throw the name Robert Cheeke at you – he is a mesomorph, he is a vegan, and he has muscle.  I admit he looks really good, especially for a vegan.  Imagine how amazing he would look if he ate meat?  He looks that way despite veganism–not because of veganism.

The two most famous athletes that are vegetarian are Carl Lewis and Prince Fielder–both of whom have very impressive athletic resumes. But, these are freak athletes.  The rest of us can’t overcome nutritional deficiencies and still succeed. Even the great Prince Fielder went from 50 home-runs to 34 the year he switched to a vegetarian diet.  The point is, yes there are a few great athletes who are vegan.  But why would you put yourself at such a disadvantage?  And vegans, stop using these famous vegans as your examples.   The true best athletes in the world: Lebron James, Adrian Peterson, Annie Thorisdottir, Rich Froning, Usain Bolt, Samantha Briggs… they all eat meat.  Vegans, stop playing this game — yes you can show me Mac Danzig (the one vegan tough guy) and I will show you George St. Pierre (greatest MMA fighter of all time).

7.       You are less attractive.  This is an interesting read.  Almost every culture considers yellowish skin and blotchy skin unattractive – I can buy that.  And yellowish skin indicates a plant based diet.  Hmmmm….

Less attractive? I need all the help I can get — give me some burger.

8.       You are increasing your risk of stroke.  For a long time it has been known that vegetarian diets cause a deficiency in vitamin B12. I have even seen some vegetarian “science” say this is an unimportant vitamin.  Well a B12 deficiency can boost blood levels of homociseine and result in a condition called hyperhomocysteinemia, which leads to blockages in the arteries – leading to heart disease and stroke.

9.       You break so easily.  In addition to a B12 deficiency, vegans normally have a deficiency in calcium, zinc, iron, and selenium.  Maybe the deficiency in calcium explains why in a study of bone fracture risk, vegans in the United Kingdom did break significantly more bones than omnivores or vegetarians.  So you are weak and your bones break easily?

10.   You are sad. Recent evidence suggests that depression (especially in men) can often be connected with lower testosterone levels. Vegetarian diets have always been known to cause lower T levels – maybe I should have led with this one? Lower T levels means a lower sex drive.  Of course that would lead to depression –duh….  Ok seriously if you know a man that is thinking about becoming a vegan or is one – have him read this.

I know Steph billed this as my next controversial post but what is controversial about it?  Informing vegans on strongfigure is a little like making fun of the Amish on the internet — they will never find it.  This site is way too awesome for a vegan to ever come to, so sadly they will go on killing the earth…and themselves.

My next 5 posts will be short and all about motivation, so stay tuned! It’s good stuff.

Here are the cited articles.

If you need more science and more references click here.