Great news! The New York Rhinos vs DC Brawlers match is back on and it will be a part of a Grid doubleheader.

Bad news. It will not be in DC.

The NPGL has announced there will be a double header this Sunday in Long Beach, CA at the Walter Pyramid. DC vs NY will be live streamed from npgl.com starting at 3 pm PT. And the second match will feature the San Francisco Fire vs the Los Angeles Reign at 6 pm PT.

5 Reasons this is a must see event:

1. The New York team is loaded with star athletes. If you are a crossfitter or a fan of CrossFit then you know these names: Andrea Ager, Danielle Sidel, Matt Frazier, and Annie Thorisdottir, heck even their emcee is famous — Christmas Abbot. Before the season began, many thought the New York Rhinos and the Los Angeles Reign would be the premiere teams of the NPGL. Both teams are filled with stars from CrossFit. I believe the NPGL itself also believed this. The first ever Grid match showcased these two teams at the iconic Madison Square Garden. And many in the twitterverse felt as if they might be watching the eventual championship match. It was certainly a magical evening in a legendary venue.

“When I walked in today, I got teary-eyed because I feel we’re going to be around a really long time and I think this is only the beginning.” — Lindsey Valenzuela of the Los Angeles Reign

New York earned the victory that night and to much surprise it was largely due to the lesser known Rhino team members. The CrossFit stars were certainly strong in their own right, but it was the performances of Rachel Martinez, Elijah Muhammad, Andrew Rape, and Irving Hernandez that left a lasting impression with many fans. New York will come into the Patriot Center with a 1-1 record, desperate for a win.

New York lost this past Saturday night to a very powerful Miami Surge team in one of the closest Grid matches of the season. Miami was able to edge New York in the final race of the evening, stealing a narrow 18-17 victory. New York has to feel like they missed out on several opportunities to win that match. They will certainly be fired up and ready to take on DC this Saturday.

2. Jerry Hill. Hill is the owner of CrossFit Old Town in Alexandria, Virginia and many in the DMV area know all about fitness legend, Jerry Hill. Hill was the winner of the 2014 CrossFit Games Master’s Division (45-49) and one of the featured athletes of J.C. Herz’s book, Learning to Breathe Fire. (If you haven’t read the story of Jerry running down the street with an engine block in a wheelbarrow to gain grip strength but being stopped by police who assumed he was running with a stolen engine, then it is worth the price of the book.)

“I’d rather be the trouble maker.” — Jerry Hill speaking to how it feels to be a veteran leader. “He knows more about fitness than all of us…he is fitness and in this community he is a legend, so for me it’s an honor to coach him.”  Head Coach of the DC Brawlers, Justin Cotler, speaking about Jerry Hill.

One of the coolest things about Grid is that each team must start one male and one female athlete over the age of 40. Despite this mandate, Jerry would likely be starting anyway. He is outstanding at the body weight movements — his unique kipping technique will leave many wondering, should I try to kip like Jerry? And Jerry’s CrossFit games rival, Ron Ortiz, winner of the 2013 CrossFit Masters (45-49) is also a DC Brawler. The women 40+ athletes are equally impressive, led by Texas strong, Janet Black, and Shenandoah CrossFit’s Stephanie Brennan.

Jerry’s message to the DC area:

“We have the most supportive community around and I think Northern Virginia, DC, Maryland might have one of the biggest populous of boxes in the nation…as a fan base, I think the support of the DC Brawlers is going to grow quite a bit.” — Jerry Hill

3. This DC vs NY match up is going to be highly competitive. This past weekend hosted two HIGHLY competitive NPGL matches. On Saturday, the Miami Surge defeated the New York Rhinos in a come from behind victory. Going into the final race, the Men’s and Women’s Relay, the Surge were down 14-16 but the Miami coach, Steven Bowser, threw the bonus flag, which would give the winning team one additional point. Race 11 is a three point race normally and this bonus flag made it worth four points. The Rhinos built a huge lead by the midway point of the race, but there was some confusion going into the sandbag-to-bar event and the Surge were able to cut the 16 rep lead down to a 1 rep lead going into the kettlebell overhead walking lunge. The Rhinos relied on Ben Stoneburg to complete the entire walk; whereas, the Surge subbed in Marco Coppola at the midway point and this decision put Miami into the lead. Sarabeth Phillips and Matt Fraser nearly overcame the Miami lead but Nick Urankar was able to complete the snatches and race to the finish line ahead of Matt Fraser. Miami won the match 18-17.

As exciting as Saturday’s match was, Sunday’s match featuring the Phoenix Rise vs the LA Reign might have topped the previous performances.  Once again, the win came down to race 11. The Reign had a 17-15 lead going into the Men’s and Women’s Relay. Phoenix built an early lead but again, the sandbag-to-bar proved to be a game changer. LA was able to overtake the lead but then a coaching decision to replace Noah Olsen on the deficit handstand push-ups proved costly when Valerie Calhoun, the Sniper, came in and evened up the race going into the five 225 lb snatches. LA’s Kenny Leverich got to the bar first but Phoenix’s Danny Nichols would not be beaten. Nichols flew through the snatches and Phoenix won! Or so we all thought. But no…LA threw the challenge flag arguing that Sheila Barden should have been given credit for one of her deficit handstand push-ups and the challenge was upheld. So the match came down to a restart 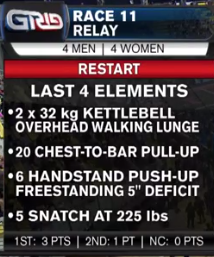 of the last four elements. Again LA jumped out to the lead and again the Phoenix Sniper, Valerie Calhoun, was able to bring Phoenix back. Leverich and Nichols were nearly even approaching the snatches, both flying through the 225 lb Olympic movement. In the end, Danny Nichols won the event with the final sprint to the finish line and Phoenix earned its first NPGL victory.  Twitter was in a buzz over which match, NY vs Miami or Phoenix vs LA, was the better of the two. One thing is for sure: they were both incredible.

Can New York vs DC live up to this past weekend’s excitement?

DC dominated their first two matches, 21-14 over the Phoenix Rise and 22-11 over the Philadelphia Founders. But the New York Rhinos are one of the top teams in the league. And the new race format, Teton, might fall more into New York’s strengths.

Match Breakdown: The DC men have been very strong and have edged their opponents in both matches. But the New York men might be the best in the league. Matt Fraser, Elijah Muhammed, and Andrew Rape are considered by many to be the best male trio on the grid. Can Marcus Hendren, Christian Harris, and Ken Battison match them? Christian Harris has already called out Muhammed once this season and backed up his words when he outperformed Muhammed on the burpees-to-10′ rings. I think the DC trio will hold their own against the mighty NY men, and it will come down to DC captain, Tim Carroll, and Jerry Hill  against Ron Mathews (40+) and Irving Hernandez, who I believe may get the start over Ben Stoneburg in the Teton format. As good as the DC men are, the DC women are clearly the strength of the team and the reason they are currently ranked number one in the NPGL power rankings. That said, I would not be surprised to see a lineup change from head coach, Justin Cotler. Lindsay Bourdon Menerey, Taylar Stallings, Janet Black, Abby Graham, and Ingrid Kantola have been super impressive to date but in the new Teton format, I wouldn’t be surprised to see 6 time CrossFit Games athlete, Christy Phillips Adkins. I can potentially see Cotler replacing Ingrid or Abby with Christy in the upcoming match.

Why would Cotler break up the most dominant squad in Grid?

The Teton Women’s Echo was made for Adkins. Does anyone else remember Christy’s dominating performance at the CrossFit Regionals in 2013 when she made the 50 lb dumbbell snatches look light? The Echo is two races and Christy might just be the difference maker for the overall match. But who would Cotler replace? Ingrid? she has performed extremely well and both race 8 and race 11 feature rope climbs, which is something Ingrid has mastered. Abby? It is hard to imagine replacing Abby’s strength. Especially since Cotler will want to rebound in the race 7 power clean ladder after the poor performance vs Philadelphia. Perhaps Cotler will just stick with the team that is winning? Who do you think should start?

4. The DC Brawlers Women Are Stronger Than You. If you missed my past articles showcasing the DC women then you may be unaware of just how strong these DC women are. Early in the season, Justin Cotler famously quoted, “Taylar Stallings is stronger than you.” And he was right. At this point Taylar has been the strongest woman in the league. And her teammate, Lindsay Bourdon Menerey, has been arguably the top athlete in the gymnastics movements in this inaugural season of Grid. But the other Brawlers women have also proved tremendous. Seriously, you do not want to miss seeing the DC women. They are beyond impressive. Taylar on barbell and Lindsay on the rig is must see action. They are worth the price of admission themselves. So come out and see what the fuss is all about!

5. It is time for DC to REPRESENT. DC loves a winner. And that is what we have with the Brawlers. This will be by far DC’s toughest competition and the Brawlers need YOU to come out and support them. Both Stallings and Hill have praised the support our community has shown them but I think we can do more. The Grid announcers have declared the San Francisco Fire fans the loudest in the league but I think that can all change on Saturday. I am picturing the way Redskins fans used to rock RFK stadium. DC, I say we test the Patriot Center’s architectural integrity. Come out this Saturday, September 6, 7 PM at George Mason University’s Patriot Center, and support your First Place DC Brawlers! Tickets start at only $15.

In order to help you better understand Grid and in turn enjoy your spectator experience. Here is an info graphic provided by Grid University. You can find additional information at Grid University.

So come out and support the Brawlers! And check out our Facebook page, where we are giving away DC Brawlers T-Shirts.