My first thought, “Shit. Just. Got. Real.” Ugh, muscle ups.  Dave’s intentions are clear: thin the heard.  But I was a little excited because it was a chipper WOD. I thought “A chipper WOD with a bunch of muscle ups at the end. I got the first part.” I may be one of eight people who likes long, grueling chipper WODs.
This time I received texts that weren’t so nice after 14.4 was announced:

That is a crazy, sadistic event.
I won’t make it to MUs.
Dave is a whore.
(Editor’s note: That last one is my favorite.)

Usually I go on Saturdays to do the Open WOD, take Sunday off, and try again on Monday for a better score.  But I knew just by looking at the WOD and hearing about how other people were doing, that this wasn’t one to repeat. One and done.

As usual, I was a little nervous today before the WOD.  I tried to strategize how I’d do my toes-to-bar (T2B).  My goal was to finish the T2B because I struggle with those. At most I can string 10 together, so I decided it was best to save my hands and arms and try for sets of five for as long as I could.

First I’ll have to clear the rower. I talked to Jeremy earlier today about the rower and he told me that most people were finishing in the three and four minute range.  Cool, I’ll try to finish under 4:30.  My plan for wall balls were sets of ten. Cleans, one at a time. But first, I’d have to get by T2B. I was going in with a goal of 110.

Jeremy was my judge.

The rower was no joke. I felt good for the first minute, then I realized I wasn’t even half way finished and my pace was already jumping up and down.  Somehow I finished the rower in 3:52.  Good, I’m ahead of my goal on that part. Now let’s get on the bar and knock out T2B in sets of five.

I put my arms above my head to reach for the bar and my arms felt heavy. Oh boy, we have a problem. Shake shake, reach again.

The first five T2B reps came easy. Drop. Reach up and do it again.  I only managed to string three together. This is going to get ugly. My hands started to hurt. I think it was somewhere around rep 13 that I started struggling, way too early. It was clearly getting in my head. I was having to break them up into singles. Then out nowhere I put two together and my confidence was boosted just a little and I thought to myself, “I’m back in this, I can knock out two at a time.” Nope.  I’d get back on the bar and get no rep’ed on my first try. 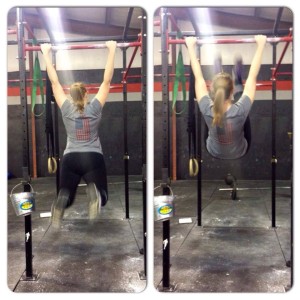 I remember a lot of cussing out of frustration. I remember telling Jeremy I was never coming back to CrossFit, that I suck at CrossFit, and a few other over-the-top comments. He kept a straight face and just kept telling me “Back on the bar.” No rep. No rep. I was angry and hurting. I came off the bar with just over a minute to go and told Jeremy, “I give up, I quit!” This time he wasn’t straight faced and mentioned something about getting my ass back on the bar. Time was winding down. If I pushed really hard, I could do this, I could finish T2B. So I pushed. I’d get one, and no rep again.  One again. One again. I was pushing hard and trying to fight the frustrations in my head and not think about my sore arms and hands.

Immediately I looked down at my hands and my right hand was jacked, ripped in two places.  One spot was missing the skin and bleeding already. The other spot had dangling skin waving at me but not yet bleeding.  Two reps short of my goal and my hands are shot. Even if wanted to try it again, my hands won’t let me! It’ll be a few days before I can do anything that requires a grip.

Lost: Tasha’s confidence in CrossFit.
Last Seen: Somewhere between reps 9 and 48 of T2B.

I walked away seriously doubting myself. I’ve been doing this for over a year (15 months) and toes-to-bar are what gets me?  Awful.  One of our coaches came to congratulate me afterwords and asked what I scored. With an eye roll and disappointment in my voice I told him my score. He shot back with “Well, you’ve probably never done 48 T2B at once in a WOD, so that’s a positive.”  Ehhh, true.

I sat by myself for a few minutes to clear my head and get over my hissy fit.  I tried to think of what I could have done better: 1. Not let it get in my head.2. Wear tape on my hands. 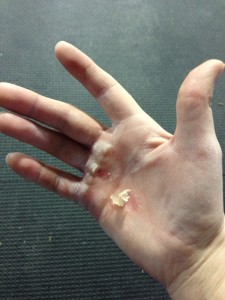 Other than that, I had nothing. I was pushing as hard as I could.

I left the gym being friends with CrossFit again. I apologized to Jeremy for anything hateful that came out of my mouth.

Today was painful, on the inside and out.  But I’m trying as hard as I can, and that’s all that matters.  I’ll be back, I like it too much to quit 🙂 Ripped up hands and all.