The National Pro Fitness League (NPFL) is the first co-ed professional sports league of functional fitness athletes (think The CrossFit Games) who will compete together as a team. The NPFL defines itself as a human performance racing league.

What is human performance racing?

Teams of four men and four women (one of each who will be over 40!) will compete against each other in two-hour matches, completing a total of 11 events.

After a team has completed an event, it will move on in the course, which is why it is a race — a human performance race.

Each athlete will be paid per match with a minimum salary of $2,500 a match.  This is a growing league with tons of excitement, amazing leadership, and we here at Strong Figure believe this may be the next big thing in the world of fitness.

The first five teams announced were The Phoenix Rise; The Philadelphia Founders; The San Francisco Fire; The New York Rhinos; and The Los Angeles Reign (the Reign’s women include Sam Briggs, Akinwale, and Lindsey Valenzuela — is that fair?)

Brand new additions to the NPFL include teams from Boston and Miami (so new that they haven’t even announced names yet), and the DC BRAWLERS.

Despite being one of the newest teams, we at Strong Figure are confident that the DC Brawlers will represent themselves well in the NPFL. For those of you who follow me on twitter (@ejwalker7) you realize how big of a Washington DC sports fan I am #HTTR #Natitude #Wizards #Caps #DCU and soon to be #Brawlers.

Here is a quick bio of Coach Cotler that was provided to me by the DC Brawlers:

Justin Cotler is the Owner and Head Coach of CrossFit Dynamix, one of the most respected and well-known CrossFit affiliates in the world.  Justin’s vision and initiative have led CrossFit Dynamix to become a brand name with over 400 members and a competition team, “TEAM DYNAMIX,” that finished 10th in the 2012 Northeast Regional, 1st in the 2013 Northeast Regional, and 5th in the world at the 2013 CrossFit Games World Finals, televised on ESPN.  Justin is one of the most sought after functional fitness experts and offers coaching and programming for numerous CrossFit Games and Regionals competitors.

Prior to opening CrossFit Dynamix, Justin was the owner of Dynamix Gym, a well-respected private training facility in Astoria, NY.  He is also an accomplished singer/songwriter/recording artist who has performed for 17 years on stages across the globe from the Late Show with David Letterman to the Red Cross Gala Ball for the Prince of Monaco at the Sporting Club in Monte Carlo.

He is a graduate of the University of Pennsylvania, where he earned a BA in English Literature, played varsity basketball and was captain of the golf team.  His lifelong love and success in the areas of sports, the arts, and competition make him a natural leader and motivator.

So now you can tell why I am so optimistic about the DC Brawlers being a league leader in the NPFL!

Coach Cotler was even gracious enough to answer several of my questions regarding the Brawlers and the NPFL:

Erik:  Since you are originally based out of New York, will you be moving to the DC area or have you already moved?

Cotler: I will keep my residence in New York, but visit DC frequently to coach and train the team in our facility.  Having all of our athletes together for coaching and training is important.  Once the athletes are drafting, we’ll be spending a lot of time in DC to prepare for the matches in August.

Erik: Are the other owner operators DC area natives?

Cotler: Justin Bizzarro grew up and went to high school in the area. He has a residence in the area as well.

Erik: Are any of the owner operators CrossFit-type athletes themselves?

Erik: Can you explain more to us about the selection process of the athletes?

Cotler: The inaugural season will be slightly different compared to future seasons. We are allowed to sign eight athletes prior to the draft, but we will also be drafting 12 athletes from the official draft pool of finalists coming out of the final combine in Las Vegas. We believe watching these athletes compete in person will give us a better understanding of their abilities, so we will be sending representatives from the Brawlers to several events over the coming months.

Erik: What types of athletes will the Brawlers look for? Specialists to focus on certain parts of the game? Or well-rounded athletes who will be good at everything?

Cotler: Great question. We will be looking for both.  Without a doubt the NPFL creates an incredible opportunity for the specialist, but it’s essential to grab some generalists as well.

Erik: In this past weekend’s Boston Combine the “DC team” did really well.  Notable athletes like Gretchen and Alicia represented the DC team– will they be top choices to represent the Brawlers?

Erik: Since the Brawlers are not competing until 2015, are they allowed to recruit these top athletes now or will they [the athletes] likely be signed by other teams?

Cotler: We actually will be competing in the abbreviated season in ’14, so we are actively recruiting to fill our roster.  The ’15 season will feature a full run of matches.

Erik: In the future, will there be a DC combine to help choose the athletes that will represent the Brawlers?

Cotler: This will be up to the league.  I’m sure they are always surveying the landscape, but it would be difficult to know future combine locations.

Cotler: We are looking at creating a good mix of athletes, both household names and rising stars. The unique opportunity with the NPFL is that different athletes will have the ability to shine, because the format of the matches are so different from any other fitness event that has come before them.

Erik: I know the NPFL is not actually associated with CrossFit Inc. but for obvious reasons these two entities will undoubtedly be linked.  Is CrossFit or the term CrossFit something the Brawlers and NPFL are trying to distance themselves from?

Cotler: We refer to the sport as Team Human Performance Racing.  We see the NPFL as the natural evolution of Fitness.  The team aspect of the NPFL and matches that last 2-hours in an arena setting will appeal to a broader audience and bring a new dimension to the competitions.  We’re excited to be a part of that type of competition for fans and the athletes.

Erik: What venue will the Brawlers use as their home court?

Cotler: We are evaluating several options in and around DC right now.  Ideally we’ll find a warehouse location that we can strategically build out to be the training facility for the DC Brawlers.

Erik: Since this is a professional league, what type of money will the athletes make?

Cotler: As with any professional sport, the compensation will vary based on several factors including ability, previous performances in other competitions, etc.  Most, if not all, of the athletes have full-time day jobs and for the first abbreviated season, their salaries might not allow them to become full-time NPFL athletes.  However, we believe that as the league grows this will change.  As functional fitness fans, we’re glad to see the sport’s biggest stars get paid as professional athletes.

Erik: I know NPFL President, Jim Kean, has pointed to television contracts being in the works.  Is there any news of local programming covering any of the 2015 DC Brawlers matches?

Cotler: The television contracts are managed by the league and are currently in the works.  The first matches for the DC Brawlers are scheduled to take place in August of this year and will likely be broadcasted.

Erik: We would love to include any additional information that the Brawlers would like for future fans to know, such as sponsorships, involvement, etc…

Cotler: We’re thrilled to be part of the NPFL and represent our nation’s capital.  There is an awesome community of functional fitness athletes in DC and we are planning to do some special things together over the next few months.  Thanks to all of our new fans for the support!

On behalf of Strong Figure, we are so thankful that Justin Cotler took time out of his busy day to answer all of our questions.  We are super excited to be DC Brawler fans!

Here are the links to the DC Brawler social media pages: 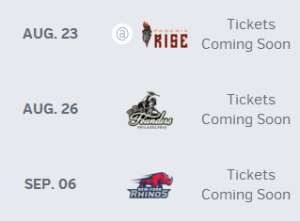 If you would like to know more about the DC Brawlers and their Ownership team click here!

Since the time this interview published, the NPFL has officially become the National Pro Grid League (NPGL) and the name of the sport is now known as, “Grid.”