It is almost impossible to get fat from protein. 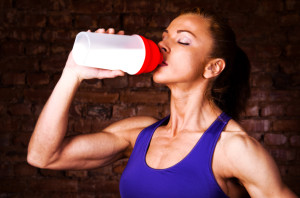 Many are still listening to outdated nutritional science and believe protein will cause you to gain weight.  To help shed some light on this I am giving you some good evidence that conflicts what your 1983 Nutrition text book says:

You can eat as much protein as you want and there is very little chance it will turn to fat.

Anyone confused on this issue should read this great article from Dylan Klein, Protein Will Not Make You Fat.

Think about what this HIGHLY CONTROLLED study says:

These subjects were literally forced to eat 1,000 kcals more than what they needed to maintain their body weight for 8 full weeks, and even then it was seen that the protein contributed to increases in lean body mass rather than body fat.

If reading is not your thing.  Here is a two minute video that explains why it is almost impossible to get fat from eating “too much” protein:

If you still don’t buy it — do this little experiment.

Month one:  eat your normal diet but cut your protein to under 50 grams a day.

Month two: eat your same normal diet, but increase your protein to whatever you feel like, and cut your sugar to under 50 grams a day (which btw, is still pretty high in my opinion for sugar).

I guarantee you will lean out during month two — despite the fact you likely ate more calories.