Watching six local athletes compete in the Superfit CrossFit Games this weekend in Richmond left me feeling extremely motivated to get in the gym and start throwing some weight around. Seriously, I’ve never been so moved by a group of people working so hard to accomplish one simple goal: finish three CrossFit workouts. Ok, simple wasn’t the right word to use to describe this past Saturday, but for most people, finishing a workout is no big deal. I’ve never seen more people–extremely fit people–collapse to the floor after 14 minutes of three exercises. With a partner. 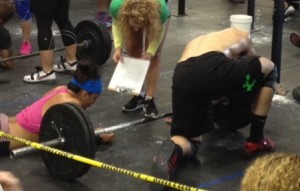 You see, this is why I tell people that they have to CrossFit at least once in their lives. Even if you hate it and never want to do it again, for one brief moment you’ll experience what others never will, and you’ll eternally respect those who choose to do this on a daily basis. Or you might just call them crazy–one or the other. But at least you’ll know!

So on Saturday, these competitors had to complete three separate CrossFit workouts. Three people competed in the scaled (lighter weight) division and three competed in the Rx (prescribed weight) division. Every single person I knew–and all that I didn’t–gave it their absolute best effort. I was so inspired by every last competitor. Over 50 teams competed in the Superfit Games, and all my friends placed within the top 20–two of which who earned second place in the scaled division. I couldn’t have been more proud!

THE COMPETITION
Here’s what each team had to do:

Karabell WOD 1:Workout number one was to perform as many rounds as possible of 10 barbell snatches and 20 wall-balls in eight minutes. Men had to snatch 135 or 95 pounds and women had to snatch 95 or 65 pounds. The difference in weight depended on if competitors were in prescribed or scaled divisions. Men also had to throw a 2o pound medicine ball to a 10 foot target while women had to throw a 12 pound ball to a nine foot target. Only one competitor could perform at a time and strategy played a huge part in timing. What if you had to change weight on the bar? Change who was throwing the ball? Every last detail needed to be worked out before competing to ensure the best performance possible.

Smack Yourself Silly WOD 2: The second workout was based upon three 2-minute stations. Each team started on a rower and had to row for two minutes to accumulate as many calories as possible.

The second station was set up to flip a super heavy tire for two minutes–as many times as possible.

Each station was scored individually and was weighted as one-third of the total workout. Competitors only had 30 seconds to transition from one station to the other. In my opinion, the whole thing looked grueling. If you didn’t row with correct form you could exhaust your muscles early. The tire was so huge that I don’t know how teams didn’t burn out their legs from constant squat-pushing. And front squats after all the flippin’ flipping?! Competitors were fatiguing right and left. I have no idea how some of them even finished.

Jake the Snake WOD 3: The third–and most absolute horrific workout that left many gasping, clutching, bleeding or puking, was a workout in which teams had to complete as many rounds as possible in 14 minutes of the following three exercises:

The score was based on total number of repetitions. For me personally, doing this just once would be enough. Maybe three times for a good workout, and possibly five if I really wanted to kick my own ass. But these teams were completing eight, nine, and ten rounds of this workout! Maybe even more–I’m pretty sure I kept losing count. But let’s think about this for a second: how many people can do eight continuous pullups? Then throw (up to) 115 pounds overhead and squat–butt to floor–ten times, throw the weight down, perform a “hands-release” burpee, jump over the squat bar, burpee again, and jump back? Twelve times?! I was down right exhausted just watching!  I had no voice by the end of the day just from screaming at my friends to “get up!” or “keep moving!” or “don’t stop!” or “OHMYGOD ARE YOU OK?!” (This, by the way is a whole different story that will come out later this week.) 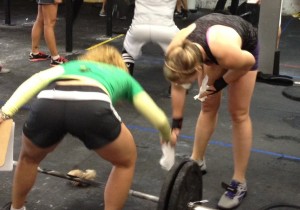 A COUPLE TIPS ON HOW TO WIN
Overall, I’d say these people are rock stars. When I asked them for competition advice, they each gave me some great info that I think is important to remember not only when competing, but in training as well.

Tip from Tori, a Strong Figure contributor and coach at CrossFit Harrisonburg in Harrisonburg, VA
If I could say one thing about competing in CrossFit it would be to give it your all! It’s fun to just go out and be determined to do your best. It doesn’t matter where you finish or what you didn’t do. What matters is you did what you could do and worked your hardest to finish a speific workout! It may not always end the way you planned, but hey, you competed! 🙂
Tori might be the most upbeat competitor with the most intense drive that I’ve ever met. She is 100% smiles and encouragement, and then 100% fierceness and terror to the competition. In the end, she’s happy–no matter what she did or didn’t do–because there’s never a moment when she doesn’t try her hardest. I strive to be more and more like this every day–as we all should.

Tip from Ali, a Strong Figure contributor, Fitness Instructor, and CrossFit athlete in Harrisonburg, VA
Believe in yourself and all that you are. Know that there is something inside of you that is greater than any obstacle.
Every time I talk with Ali, my day is better. Win, lose, triumph, or fail miserably, Ali is like the beacon of sunshine that uplifts even the saddest of all moods. And what she says always seems to be so simple, yet incredibly enlightening. If you’re reading this article, you’re either interested in fitness–in some way or another, or on improving your life. Whether it’s moving more, trying CrossFit, competing for the first time, eating better, or just getting up the courage to start something new, Ali is right: “Believe in yourself and all that you are.” Sure, it sounds a bit cliche, but if you knew Ali, you’d know she has a heart of gold and she would believe in YOU any day. Why not give yourself the benefit of the doubt?
We want to know: when it comes to fitness, would YOU be willing to compete in any sort of event? What’s your biggest competition fear?
Stay tuned for Tori’s story of her mega accident during the Superfit Games and find out how she continued to fight for her finish. This story is absolutely incredible and coming soon!
To see all the images from this weekend, go the Superfit Photo Gallery!