I get asked a lot, and I’ve seen recently in many different social media forums, questions about proper footwear.

And my honest opinion is this: Go to a specialty shoe store in your area, talk to a professional, and get fitted for the right shoes.

But that’s sort of a lazy answer too. I know, because it’s easy to say “I’m no pediatrist, and I don’t know your feet either.” But I can also say that I’ve been to those fancy shoe stores and the salespeople are trying to make a pretty penny off you. It’s hard to trust someone who is making money off your purchase.

That’s where the real reviews from people like you come into play. And I thought, what better place to open up a forum for comments on your favorite shoe? What can we FIGURE out about shoes??

HERE’S WHAT I THINK:

You have to take this as my sole opinion and nothing more. I’ve tried a lot of shoes and I love some and hate some. Ha…”sole” opinion. Wasn’t even trying…

RUNNING:
When I drove 45 miles to get fitted for a running shoe, I was fitted once for Brooks, and the second time I went, I was told that Saucony was a better fit for my foot. (And my foot, for the record, is flat, fat, and over pronated.)

My vote between these two is Brooks. Saucony just flat out rubbed blisters on my heels…every time I bought a pair. Brooks were comfy and lasted a long time. They actually outlasted my running phase. I don’t like running so I can’t give you much more than this. I do know that a lot of my friends prefer to run in Nike Frees and I’ll admit, these shoes are super comfy.

The Average Gym Goer:
Speaking of Nikes, get the Nike Frees. They are great for pretty much everything–especially if you are the one who lifts, runs, takes a class, walks the dog, and ends the day with a few extra minutes on the stair mill. They’re just a great all-around shoe. Oh and they’re comfy on wide feet!

Another All-Around Gym Shoe and EXCELLENT for CrossFitters:
The Reebok CrossFit Nano. Don’t let the word “CrossFit” fool you: these shoes are freakin’ awesome for anyone–not just CrossFitters. In fact, I’ll never buy another tennis shoe again other than the Nano no matter what I’m doing in or out of the gym. The Nanos take comfort to a whole new level. And because they’re a bit flatter on the bottom, you can do all your lifting in these shoes and then turn around go PR on your 5k time. LOVE the Nanos.
Customize your own Women’s CrossFit Lite TR

LIFTERS
I also own a pair of Reebok Olympic Lifting shoes. And I love them. But they’re the only pair of lifters I’ve ever had, so that’s all I can tell you. Hey shoe companies–send me some lifters to review for you!
But seriously, I do in fact love my Reebok OLYs. You actually heat them (as well as the Nanos!) and they conform to your feet! I’ve even completed workouts where I’ve run and jumped in them, and they were great for that too–though I try to save them for JUST lifting.

Erik has a pair of Adidas lifters (maybe he’ll tell us about those in the comments?)

One of my friends tried the new Innov8 Lifters and she ended up sending them back because she didn’t like the low heel support. She said she still felt like she was falling forward instead of being supported around the heel.

You know which lifters I really want to try? The new Reebok Powerlifter. It just looks sweet, you know? Sort of like a Chuck Taylor but even better. Which, by the way, is another shoe popular with several lifters. I’ve never tried them though. Anyone else want to give us opinons on Chucks?

The Minimalist:
The last type of shoe that I know a little about is the minimalist style shoe and the Vibram. I own two pair of New Balance Minimus and I love them for exactly what they do: they put little between you and the ground. And the soles are great for all terrain–making them my shoe of choice of Obstacle Cource Racing. And while I really like this style for being outdoors, I’ve recently tried the Vibram Five Fingers Bakila shoe because my physical therapist said that the reason I get heel and ankle pain when running is because I’m too much of a heel striker. He suggested I try the Five Finger style because it will force my feet to correct the striking pattern. He also said because the balls of my feet hurt too often when jumping (burpees, double unders, box jumpes, oh my!) that the Vibrams would help develop better muscles in my feet. So I’ve been wearing these shoes a lot for running, jumping, and just overall around town, and I have to admit–my running feels better and I’m paying much more attention to my foot strike. 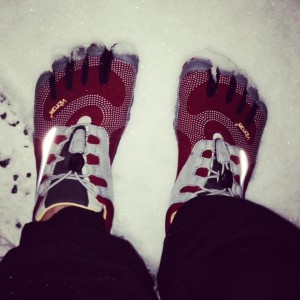 The only thing I didn’t like about the New Balance Minimalist was that it took a long time for my fat feet to break in. They were REALLY tight on the balls of my feet and often I couldn’t wear them for long. Another friend reported the same. I read some reviews on the Vibrams about this same issue but apparently if you get the ones with the adjustable laces, you won’t have any width problems. That’s what I did and I’ve run into zero issues there.

So these are my opinions. I love the Vibrams and my Reebok shoes the most. But there are a lot of people who have questions, different feet from mine, and different athletic goals. So if there’s a shoe you love for any certain reason,

WRITE ABOUT IT IN THE COMMENTS BELOW!

Let’s make this page a “Shoe-In” for all the right info on all the best athletic footwear!! 😉