I got the heads up last week from my friend, Priscilla, that Panera was hiding a Paleo menu from its customers. Are you kidding me? And I was just there two weeks ago picking through fried onions on my spinach salad!

After getting really angry for never knowing this before, I immediately asked Erik, why in the world would Panera hide the one part of its menu that is clearly the healthiest? It’s hard enough as it is to go out and eat nutritious food. Now they’re hiding it from us?! (Seriously, imagine my mad face here.)

So luckily the same friend who found this golden ticket sent me the online Paleo menu because even after I tried Googling it, I STILL couldn’t find it myself. Talk about secret. And it’s not just secret to the general public either–it’s actually pretty secret to the employees of Panera too! Not only did another blogger report that her cashier didn’t even know how to ring her up, but the salad makers at my Panera  had no clue what they were making. After I ordered two different salads, the chefs started pulling out salad cards and consulted with one another to figure out what it was that they were to make. 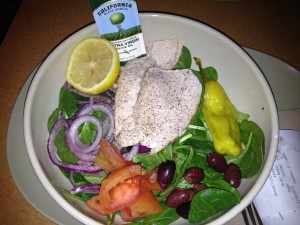 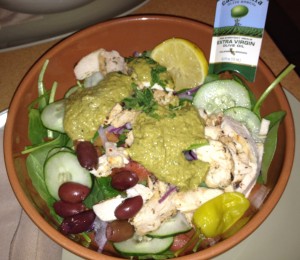 The turkey salad was pretty true to its description and I personally thought that it was fairly simple. The olives were probably my favorite part but honestly, I felt like I was eating a very plain Greek salad but without the feta. I’ll admit that the fresh squeezed lemon and the packet of extra virgin olive oil were a nice touch, but probably not nice enough to get me to order it again. Don’t get me wrong–the salad wasn’t bad–it just wasn’t all that great either. It was certainly fresh and the turkey was moist, but not overall flavorful. I left feeling very hungry still and I think I ate four spoonfuls of almond butter when I got home just to get some sort of satisfied feeling.

Erik ate the chicken salad which he really enjoyed. Notice earlier that I said that this salad is supposed to have bacon and diced eggs on it. I don’t see that. And no, you’re not missing it either–it wasn’t there. Instead, we received a spicy guacamole sauce and kalamata olives. Again, we were pretty certain that the cooks at Panera had no idea what to do when Erik and I ordered off this menu, and he ended up with a different salad altogether. In fact, I’m not even sure this one is gluten free/Paleo because I have NO idea what might be in the guacamole. At least it was good. In fact, it was really good. We both thought this salad was the best one of the night–because of the guacamole and olives–which weren’t even supposed to be on the salad in the first place.

Winner of night one? The WRONG salad.

Attempt number two to elicit the hidden menu items from Panera turned out to be a slightly more successful venture. We ordered two items again: 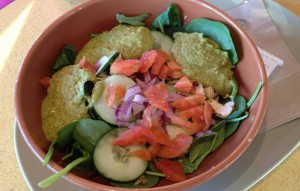 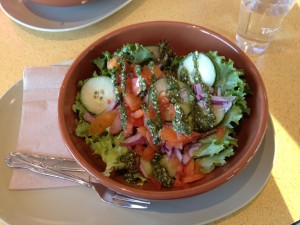 The chicken hummus bowl was freaking awesome. This bowl was so flavorful–the hummus 100% made the dish. But about halfway through eating my salad I looked at Erik and said, Wait a minute. How can hummus be Paleo if it’s made of garbanzo beans and beans are NOT part of a Paleo diet? (Thanks for pointing that out Priscilla!) True, I’m not a Paleo expert and every time I’ve researched it, there seems to be varying opinion on its allowance of “certain” foods, but if we’re sticking to close Paleo guidelines, I’m not sure this qualifies. It may be gluten free depending on what is used in the hummus, but I wouldn’t advise severe celiacs to give it whirl without investigating further. Nonetheless, this salad was AWESOME, filling, super flavorful, and I would–and will–totally order it again, and again, and again. In fact, Erik was so jealous of how much chicken I got in my bowl (even thought it’s hiding in the picture) and of how filling this meal was, that I’m pretty sure he wished he had ordered this one for himself instead.

What he ended up with, the steak-wrap bowl, was not exactly what he expected. First of all, don’t expect to make wraps out of this messy concoction–it definitely is served as a salad and not as a “do-it-yourselfer.” It looks pretty good in the picture but Erik’s first complaint was that there was not a lot of steak in the bowl. He also complained that the salad was much less flavorful than the chicken salad he had previously, and he left Panera very hungry. He actually made the comment, “If I’m going to spend $20 on a meal (he bought my salad too–thanks E!), then I should at least feel full.” Another friend ordered this same menu item after reading about the hidden menu post on Strong Figure’s Facebook page, and she said that it was “a little messy, but good! The cashier said it was the first time she had anyone order from the ‘hidden menu’.”

And about those cashiers. The first night that I ordered, the girl who rang in the salads did not seem to be caught off guard like I assumed she would be, yet it took her a while to find the items to punch into the computer. The second time I ordered, the cashier actually asked me to wait while she found the items. While she was searching, I asked her if she knew why these menu items were “so secretive” and kept from the public. She answered that she really had no idea, but it was her assumption that they were just “old menu items that had been taken off, yet they were still able to make the salads due to the simple ingredients.”

Works for me I suppose…but I still have NO idea why these healthy items have to be so hush-hush in a society plagued by obesity. I would think that offering a Paleo and/or gluten-free menu would make your restaurant a HIT among fitness/health-conscious people, and at the least give options to those who suffer digestive/IBS/diabetic/etc. issues. But business is business, right? Bring in profit–i.e. bread bread and bread. I get that Panera is a large chain that pulls in a huge cash flow. But if they’re keeping the ingredients in stock to make dishes that offer their customers more variety, why take it off the menu? And worse, why make it such a secret?

I did a little digging and I found that the items were  announced to members of the MyPanera rewards program and to those who follow @panerabread on Twitter. So to reinforce what Panera did–or didn’t do–they did NOT offer the menu to the average health-conscious consumer or the customer suffering from wheat allergies, but instead they advertised to their own followers–the ones who already love what Panera has to offer: Bread. Doesn’t make much sense to me–I would think they’d try to hit a new target. When asked–through Twitter–“Why keep the menu such a secret?” Panera responded that they wanted to give their social following groups special options. Again, not special options to those who NEED them, just to those who already follow. As for those who really do need gluten-free options, Panera says that ALL its special menu items are made without gluten. And as for taste? Most tweeters reported that they like the chicken salads best, while many Paleo dieters have said that there’s nothing fancy about any of the meals.

But Alas, I’ve Kept a Secret From You!

There are two breakfast options on the secret menu: The Power Breakfast Egg Bowl with Steak: Two all-natural eggs, seared top sirloin, sliced avocado and tomatoes; and the Power Breakfast Egg White Bowl with Roasted Turkey: Roasted all-natural, antibiotic-free turkey, egg whites, warm baby spinach, roasted peppers, and basil Pesto. Unfortunately, Erik and I aren’t really big on breakfast–click here to find out WHY. If YOU are willing to try these breakfast dishes and give us the skinny, please do! We will be more than glad to feature your report! Simply Contact Us for more info!

So overall, what do you think about this menu? If you’ve tried any of the Paleo dishes listed above, please let us know your thoughts in the comments section below! We want to know what your opinions!