In honor of cyber Monday, we’re offering our “100 Hours of Kettlebells” eBook for $6.00. Just click the link, purchase, and we’ll email you the PDF within 24 hours. And everyone who purchases a copy of the book will be entered into a drawing for a FREE KETTLEBELL!

“100 Hours of Kettlebells” contains over 100 kettlebell workouts and are modeled after the conditioning workouts that I program and use for coaching and training. The book contains pictures and “How To” descriptions of all the exercises. Definitely pick up a copy at this price–it will only be this price until end of day Monday. 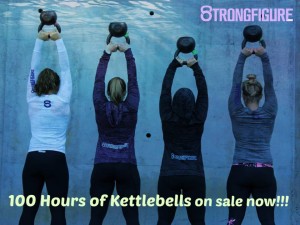 My Thanksgiving was freaking awesome.

Erik and I drove up to his parents’ house on Tuesday night and stayed up past midnight making the sweet potato casserole for Thanksgiving dinner. After sleeping in on Wednesday, we essentially hung out all day debating whether to go out and do things or to stay indoors. Traffic in the northern VA area was AWFUL and it was even snowing in places. Apparently back home, over four inches of snow had covered the area. I was supposed to meet my friend and fellow SF Ambassador, Reagan, in Tyson’s Corner, but between the weather and the bad traffic, I was convinced to stay indoors.

Thursday, Erik, his sister Shari and I all went for a long walk with the pups before the big meal. We also shared a bottle of wine that we purchased a few days earlier–a very special bottle for Erik’s birthday! Between the wine and the food, I was feeling pretty darned good on Thanksgiving night!!

What did you eat?

I actually impressed myself. I only ate one plate of food! Typically I think I always go back for seconds but (and I’ve said this in previous posts) since taking a break from lifting this month, my appetite was much less and I didn’t eat as much as I thought I would. I think I had turkey, sweet potatoes, stuffing, corn, peas, and some gravy. Between that and the wine, I was SO full.

But then came dessert.

Several hours later, even after a tequila shot for Erik’s birthday, desserts starting making their way out of the fridge. I wasn’t even that hungry for them and thought about skipping it altogether. (Go me, right?!) But then I tasted Erik’s pumpkin cheesecake and all bets were off. I ended up with a small piece of cheesecake and a small scoop of cherry cobbler and another small scoop of vanilla ice cream. Well, I think they were small scoops. They always could have been bigger, right?! And I was full. WAY too full.

But then, about an hour after dessert, I remembered how all day I had been craving pumpkin donuts. Erik ate a pumpkin donut for his special birthday breakfast and I ended up craving a pumpkin donut all day long. Instead of just eating one right then–which I probably should have done–I waited thinking I wouldn’t want one after the big meal! However, I guess when you just get something in your head, it’s hard to get it out. So the last thing I had on Thanksgiving night, was a pumpkin donut.

What was your biggest splurge this weekend? Dessert? Wine? Black Friday shopping? Ha! Let us know in the comments below!

Last and most importantly, your Strong Figure Conditioning Workout (a little early this week):

Stay tuned to hear about the rest of my weekend, including Erik’s surprise birthday party and his brother’s fiancee’s bridal cocktail party. A crazy weekend is putting it mildly, so stay tuned for more posts this week!