If you are in the fitness industry and you are not an actual CrossFitter then you have likely heard or thought CrossFit is just a fad — when will it end?

Is it really a fad though? The naysayers are actually becoming the supporters in recent months so is it possible CrossFit is here to stay?

Is it the poor programming? Often done by under-trained Cert-One’ers?

Is it the 100% chance of injury dark cloud that hangs over the sport?

Or maybe, is it the Corporation of CrossFit itself and some new competition?

The National Pro Fitness League (NPFL) is the first coed professional sport that centers around the sport of functional fitness.  Since writing this article, the NPFL is now calling itself the NPGL — National Pro Grid League (I am not sure why) but I am keeping the article the way it was originally written, feel free to comment on the NPGL name change in the comments section.You may have read my previous article where I interviewed one of the NPFL coaches, Justin Cotler.

The NPFL refers to itself as the natural evolution in the sport of fitness.  And it’s hard not to agree.  I myself have looked into creating leagues of boxes competing against other boxes, which by the way, I still think is a great idea. If you love sports, competition, strategy, team motivation, and fitness, then the NPFL is the greatest thing to happen to fitness since… well… CrossFit.

But Shouldn’t the NPFL help build CrossFit and the “Sport of Fitness“?

Of course the NPFL should help CrossFit! But can the egos at CrossFit head quarters handle another major player in the Sport of Fitness?

Why wouldn’t CrossFit want the NPFL?

Is it because CF HQ didn’t think of making it a team sport first? No.  The founder of the NPFL, Tony Budding, actually worked for CrossFit just a few years ago and proposed the idea to them.  They of course declined.

Is it because they don’t want to end their monopoly over the sport of fitness? Maybe.  I mean CrossFit has been able to do pretty much been whatever they want with no competition for years and everything they do seems to produce a gold mine of success.

Personally, I think it is because CrossFit has been cashing in on the backs of its athletes and the NPFL wants to actually reward these athletes the way they should be rewarded.  Other than the Rich Fronings of CrossFit, how many of these athletes are living off of CrossFit?  Seriously are any? Most either own a gym to pay the bills or have a completely separate job that may or may not have anything to do with fitness.

CrossFit is genius.  They have built a very rich, very successful corporation, and they don’t even pay their star employees.  Sure the winners of the games get paid, but what about all the other stars making CrossFit famous and not being rewarded on the winners’ podium? Any podium?!

Some of those same stars standing on those past podiums are now in the NPFL — getting paid!

Check out Iceland Annie talking about why she signed with the NPFL’s NY Rhinos.

Even last year’s winner of the title, Fittest Woman on Earth, Sam Briggs has joined the NPFL:

And why wouldn’t they? They get to be a part of a team, doing what they love, and making money in the process.  And although the money will likely be small in the beginning, the potential of the NPFL is tremendous.  It is only a matter of time before these athletes are getting paid serious money — LIKE THEY DESERVE.

So what is CrossFit’s response?

Will they create their own league? Will they start paying their athletes?

CrossFit has announced it will have its own team competitions starting this fall — conveniently in the midst of the inaugural NPFL season. But guess what? The athletes themselves have to PAY to be in the league. I want to laugh and talk about how absurd this is, but honestly I will be shocked if they don’t make money on this.  In fact, I will be surprised if they don’t make more money than the NPFL in this new team competition they are creating.  CrossFit truly does act like a cult and cult members will tend to follow their leader — right?

I tend to think the average CrossFit fan will follow the athletes like Sam Briggs and Annie Thorisdottir and not Dave Castro and Greg Glassman.  Do you agree?

I do know when CrossFit star, Andrea Ager, referred to the NPFL as a CrossFit league, that CrossFit HQ was sure quick to put her in her place.  But Andrea’s fans were quick to come to her support and I don’t remember many in my timeline coming to Russ Greene’s side.

Is this how successful corporations treat their top money makers?

CrossFit as a training program is full of flaws and as I have written in past articles; I think it needs to evolve to truly prosper. But neither of these detriments will bring down the mighty CrossFit. If CrossFit does near its end, it will be due to the arrogance of its corporation and the unfair treatment towards the very heart of their success — their stars.

Do you think CrossFit is doomed?  Will the NPFL hurt or help CrossFit?  Let us know your thoughts in the comments section. 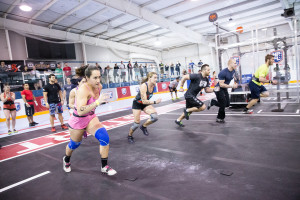 Special thanks the National Pro Fitness League (now the NPGL) for providing us with the amazing NPFL pictures seen in this article.