Team Strong Figure Ambassador and Doughnuts and Deadlifts Sponsored Athlete, April Harper, contacted fellow Doughnuts and Deadlifts Athlete Kristin Pope for a Strong Figure Athlete Interview. How does it feel to be an inspiring and motivating athlete for fellow lifters, strong females, and young girls looking for role models? What’s it feel like to have a body made of muscle? To overcome injuries? Eat poptarts every day? April’s got your Q&A with one of the hottest lifters in the sport of Olympic Lifting. 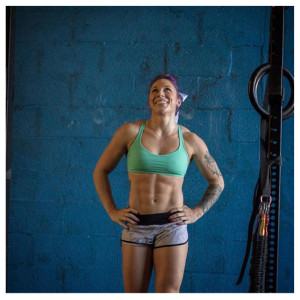 April: How did you get into Olympic lifting?
Kristin: I started Olympic lifting after trying CrossFit. I did CrossFit for about six months, then had to have surgery on my ankle. Upon returning I decided to only pursue lifting as it was a little easier on the ankle joints than the running and jumping movements in CrossFit.

April: How long have you been competing?
Kristin: A little over a year 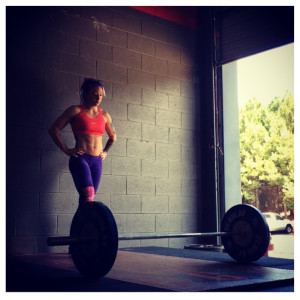 April: You have been through several injuries/surgeries; how did you rehab? How difficult was it mentally and how did you rise above the time off?
Kristin: My most recent injury was a patellar tracking problem with Patellofemoral Pain Syndrome–the rehab was extensive. I spent around two hours a day minimum doing rehab and mobility work to work on my hip mobility to compensate for my tight ankles. The rehab included a lot of massage therapy and dry needling work along with traditional rehab methods to strengthen my VMO and Glute Medialis. The three months I had to spend sitting on my butt were the most grueling so far in my athletic career. I was coming off of a really high point in training and it was devastating thinking about how I was losing all of my strength and going to start over. I could not get out of a chair without pain so anything with a barbell was off limits. I spent all of my time doing rehab, very light cardio, and upper body bodybuilding. Watching the other lifters day in and day out was mentally defeating constantly; I didn’t think I would ever get back in to the sport because the process was so slow. I am thankful to have had a great support team along the way. I just kept telling myself every day that nothing lasts forever and one day I was going to wake up and the pain be at a manageable level–and it did, several times. But then I would have a set back. I just kept pushing every day with the rehab until finally my patella would stay in the groove where it belongs. I had to completely start over with my leg strength–and as it was slow and mentally draining getting excited over numbers I could do ages ago–it recently was more gratifying than ever to finally hit new PRs.

April: Did you have any family or friends who didn’t support your fitness/competitive goals? If so, how did you handle it?
Kristin: A few of my family members along the way of this journey made hurtful comments such as “don’t get too big” or “you used to have such a feminine figure,” but my love for the barbell exceeded anyone’s negative opinions. I have lost a few friends along the way who do not understand the life of an athlete, but I have also lost friends in the past because I wasn’t single and didn’t want to party every weekend with them so my attitude about that just has been that people that don’t want to support what I want are not my real friends anyway so it is better that they are not a part of my life. 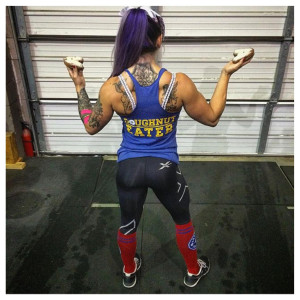 April: You use flexible dieting as a means of nutrition, how long have you done that and how has it helped you?
Kristin: I used flexible dieting to cut from a 63kg lifter to a 58kg lifter. I have counted macros for about eight months now and I love it–will never do anything else. It keeps me fueled and prepared for my training and helps me manage my weight based on the part of the training cycle I am in for upcoming meets.

April: Some people say flexible dieting is just an excuse to eat dirty all the time–what do you say to that?
Kristin: I say “if you don’t have anything nice to say then don’t say anything at all.” Haha. I do not like vegetables–I refuse to eat them–nothing in this world is going to change that to make me eat them. This is the only way for me to eat where I could control my weight gain or loss–bro food diets would never work for me–I would starve. I like my poptarts and doughnuts and do not care if other people have negative opinions about me eating them haha.

April: What is your training schedule like?
Kristin: I train six days a week. Five of those days are lifting, one is a strictly conditioning and body building day. I snatch and clean and jerk three days a week and squat heavy 2-3 times a week. I mainly lift and then I do some met-cons or steady state conditioning after. My sessions last around three hours per day. 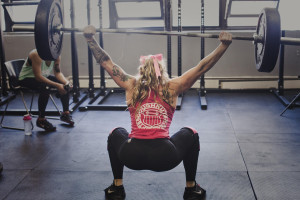 April: How is Oly lifting challenging for you? How is it rewarding?
Kristin: Olympic Lifting is the most frustrating thing on the entire planet. The snatch is scientifically proven to be the fastest movement possible by the human body only second to the baseball pitch–thus, the margin for error is HUGE. The frustration and constant strive for perfection keeps me coming back for more each day. Chasing PRs is the most rewarding thing there is. There is nothing like the joy of making a lift you have been chasing after for months. I also love the side effects it has on my body–I love looking strong.

April: Do you coach others?
Kristin: Yes, in flexible dieting. I coach my friends in weightlifting when we train together. 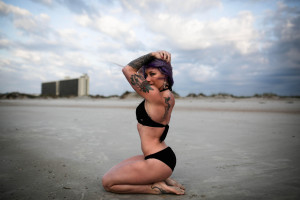 April: As a female athlete with muscle, do you get a lot of comments on your physique? Any negative comments? If so, how do you respond?Kristin: TONS. I used to get a lot of negative comments–but not anymore. I think that is kind of funny because I am more muscular now than ever. I think it has a lot to do with how I carry myself now–I don’t give a damn what anyone else thinks of what I look like.

April: Where do you get motivation on your worst day?
Kristin: I watch my old videos with really shitty technique and remember how far I have come.

April: What are your future goals?
Kristin: I want to be a National Champion Olympic weightlifter, I want to be on a World Team to represent Team USA, I want a total above 180kg, I want to back squat 400 pounds, snatch over 200 lbs., and I want to clean and jerk double body weight and be the best wife and friend I can be. 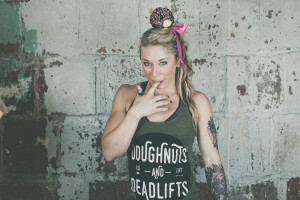 April: You’re from Atlanta, what is your favorite thing to do there besides lift?
Kristin: EAT. Atlanta is a food megaplex–there are so many amazing restaurants you could eat at a different one every day for a year and never repeat one! I love the food industry here–it is very exciting and so many different options for genres.

April: Hashtag #barbellsandbows: What is that and how did it start?
Kristin: The first day I picked up a barbell at golds gym, I was really hesitant after being called a man in high school for my large traps and biceps from gymnastics (that I worked really hard to get to go away during college to avoid these comments), and I was worried about being called negative things again if my muscles grew back. So the next day I came in to try lifting again I had a cheerleading ribbon in my hair and decided that I was going to embrace my girly side AND my muscles and never looked back. I have not lifted without my bow in my hair since. It is also now the name of my website and my company I own. 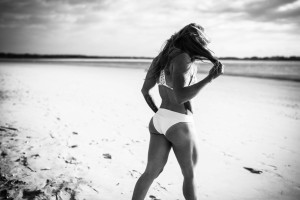 April: What does a typical day of eating look like for you? Do you try to keep it the same everyday or mix it up a lot?
Kristin: I eat different things every single day. I eat a lot of combat crunch bars–they taste so good and have a lot of protein. I love poptarts, doughnuts and froyo and at least one of those things are in my diet per day. I eat a lot of lean meat like chicken and turkey. I love cooking so I make a lot of macro-friendly recipes for dinner like burritos, meat balls, turkey lasagna etc.

April: Anything you would like to add?
Kristin: April is cool. 🙂

This week’s Strong Figure Conditioning Workouts are inspired by your Doughnuts and Deadlifts athletes:

Workout One–5 Rounds of

The deadlifts are not for strength gains, just conditioning. You should be able to do all 10 unbroken (without stopping).