Two weeks ago, I volunteered my time to the new professional sports league, Grid. I signed up to help work with my home team, my favorite team, the DC Brawlers.

I already had both a reporter and photographer going to the event to represent Strong Figure’s media team, so I figured that volunteering my personal time would get me both inside the grid, and the inside scoop on the makings of a professional sports match–you know–all the behind the scenes “stuff” that most people don’t see.

When I arrived at the Patriot Center in Fairfax VA at 2pm, honestly, there wasn’t much for me to do so early in the day. The match was at 7 and I think the volunteer organizers just needed to see who would show up so that they could assign roles for the night. I was assigned the position of “Spotter” and didn’t have to do anything until 5pm when I had a meeting with the media director. That meant I got to sit in the stands and watch–in awe–the Brawler team “rehearse” for the match.

With the sport of grid, athletes have 11 races in a two hour period. Each race contains various exercises. Some races are female only, some men, some co-ed, some two-person, some three-person, etc. So there’s a lot of strategy that must happen. I watched for about two-three hours athletes and coaches discuss strategy, movement, substitutions, and more. Athletes moved from station to station with imaginary bars in their hands, pretending to hang clean, front squatting two inches, and perform 200 pound thrusters….without the actual thruster. Gridders practiced the fastest dumbbell-burpee-box-jump method, rehearsed a perfect kettlebell clean and press technique (I really wanted to hop out on the floor for this one), and of course, took turns throwing 18 pound medicine balls to a 15 foot target.

Basically, I got to “ooh” and “ahh” over my favorite athletes for a few hours. Life was good. 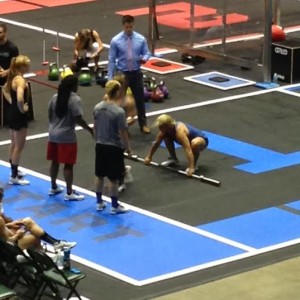 Another cool part about being on the volunteer staff–which eventually just became the media staff–was getting a behind the scenes tour of the set-up. We saw the media room, the photography room, the locker rooms, the press room, and a teensy tiny little drug testing room. That’s right folks, drug testing happens after EVERY match. No one knows who will be randomly selected, but towards the end of the match, athletes are selected at random and (at least in this case) volunteers were told which athletes to keep their eyes on. Those athletes were to be scrutinized closely–especially when eating and drinking anything–and then were to be immediately escorted post match to the drug testing room. I didn’t have that job, but I know they took at least 8-12 athletes. I saw them all hovering around the room post match. And the drug testing could be a urine test or a blood test–random samples could be taken from any of the athletes. Pretty interesting stuff if you ask me!

I probably got the coolest job of the night: “Spotter.” I sat at the Grid League media table, headset and all, and my job was to keep my eyes on EVERYTHING going on in the “blue lane,” while my new friend and USAW seminar staff member, John, got to manage the “red lane.” Before we met with the media director, we toured the media truck. This was the COOLEST thing I have ever seen. What looks like it could be mistaken for a tractor trailer rig, or maybe even a food truck, is actually a series of glorious, sophisticated, television operating control rooms with more monitors and computers and desks and people on headsets than I have ever seen in my life. You know how you occasionally watch the news or an awards show, and you see a director behind the monitors doing his job? Well times that by 25 and that’s A) how cool this media truck was, and B) how much bigger it was compared to what I expected. I don’t even know why they needed all the monitors (one for every camera plus 50 more?) and I don’t even know what the other people in the truck did, but I’m pretty sure I want one of those jobs. It just has to be cool. Period.

I actually wanted to whip out my phone and take a picture, but I was trying really hard to act like a professional. :/

So when John and I met with the director, a spunky little guy with a much larger personality, he told us what we needed to do: watch our lanes. In reality, the job wasn’t very hard, but I was so stressed out trying to keep from missing anything that I gave myself a nice little stress migraine. I watched everything that happened in the Brawler lane, and I radioed in every time the judge threw a hand in the air, or when I needed to tell the director when Brawlers were moving into the next quadrants. I helped keep him aware of upcoming exercises (“Where are they headed next, guys? Quick! Camera 1, where are you?”) and told him what coach was throwing down a challenge or bonus flag or better, which one was throwing down a tantrum. (In this case, the Philly coach.)

But honestly, I think the best part of the whole match, aside from my fascination with the media truck, was not just watching the entire match seriously up close and personal, but being on the headset with the media director. He talked the ENTIRE time to God knows how many people on headsets across the facility listening to him. And boy was he entertaining! So much so that I ended up just laughing randomly throughout matches, in between, before, after, you name it. My favorite line was when the Brawlers were just dominating one of the barbell movements and he said, “Can we add more weight to the bar just to make this fair?” You’ve got to love the Brawler strength.

After the match, I got to sit in on the press conference with Erik on behalf of Strong Figure. The Philadelphia team was interviewed first, followed by DC. If you missed Erik’s article, Who Will Be the Face of Grid, make sure you check it out! There are some great pics and videos from the match-up against Philly.

I was scheduled to go back to DC last weekend for the DC Brawlers vs. NY Rhinos match, but since the sport is so new, some of the finances involved in putting together these matches got tied up and three Grid matches had to be postponed. I’m ecstatic for THIS SUNDAY because two of the matches are BACK ON starting at 3pm Pacific time. I’m a bit devastated that I can’t be there at the Walter Pyramid in Long Beach, CA for this double header, BUT if you can go, please go! Find ticket info here and start supporting this new league!

The match this weekend against New York is going to be HUGE–in more ways than one. The strongest women of the league (Brawlers of course) are going head to head with two-time fittest woman in the world, Annie Thorisdottir and her teammates, Liz Adams (who coached my CrossFit workout at NYC 5th Avenue back in June–she’s so strong!) and the famous Andrea Ager. I imagine the media, fans, functional fitness enthusiasts, etc., will be swarming the Patriot Center. And I’m sorry for not mentioning the men yet in my post–I can’t help it–I am obsessed with the strength/muscles/power of the women! I can’t help but watch in awe and wish I were the same! But the guys are equally impressive. Christian Harris, Marcus Hendron, and Jerry Hill of the Brawlers have been dominating some barbells, and Elijah Muhammad, Andrew Rape, and Matt Frasier of NY seem to be as equally tough. Watching the guys throw weight around–weight well over 250+ pounds–I mean, who can’t be inspired? In this match coming up, I’m sure my Brawlers will be victorious, but I also think that this could be a tough one! Regardless, saying that I am SO excited, is an understatement!

And I don’t want to take any excitement away from the LA vs San Francisco match-up; these two teams are so freaking powerful I’m not sure I have the words to express my astonishment at their strength and talent. San Francisco Fire has the multi-talented Courtney Walker, one of the most impressive guys I’ve seen compete–Sam Dancer, and superstar strong woman, Alessandra Pichelli. The LA Reign’s team is loaded with “liftlikeamother” Alicia McKenzie — a hometown favorite — Valerie Voboril, gymnastics star Kristan Clever, and the famous “liftlikelindsey” Lindsey Valenzuela, not to mention a stacked men’s roster with Kenny Leverich, Tommy Hackenbruck, and Noah Ohlsen. How can you not tune in on Sunday?

If you can’t make the trip to Long Beach, (and if you can, can I go with you?) 😉 please join the rest of us by watching the matches on npgl.com. This league needs your views, support, and a larger fan base! If you’ve never watched a match, you might become addicted. I know Erik and I are going to make Sunday a total sports night. We’ll have football on TV and the grid races on our laptops and iPads. Beer and good food just might ensue. 😉 I cannot WAIT to see the Brawler ladies take on Annie Thorisdottir nor can I wait to see what the NY men have to put up against legendary fan favorite Jerry Hill! (Can you tell who gets my support?!) Join us, follow us on Twitter (@strongfigure) and watch the event. You will NOT regret it. Don’t miss out on being a part of the newest, hottest sport to hit the big leagues! 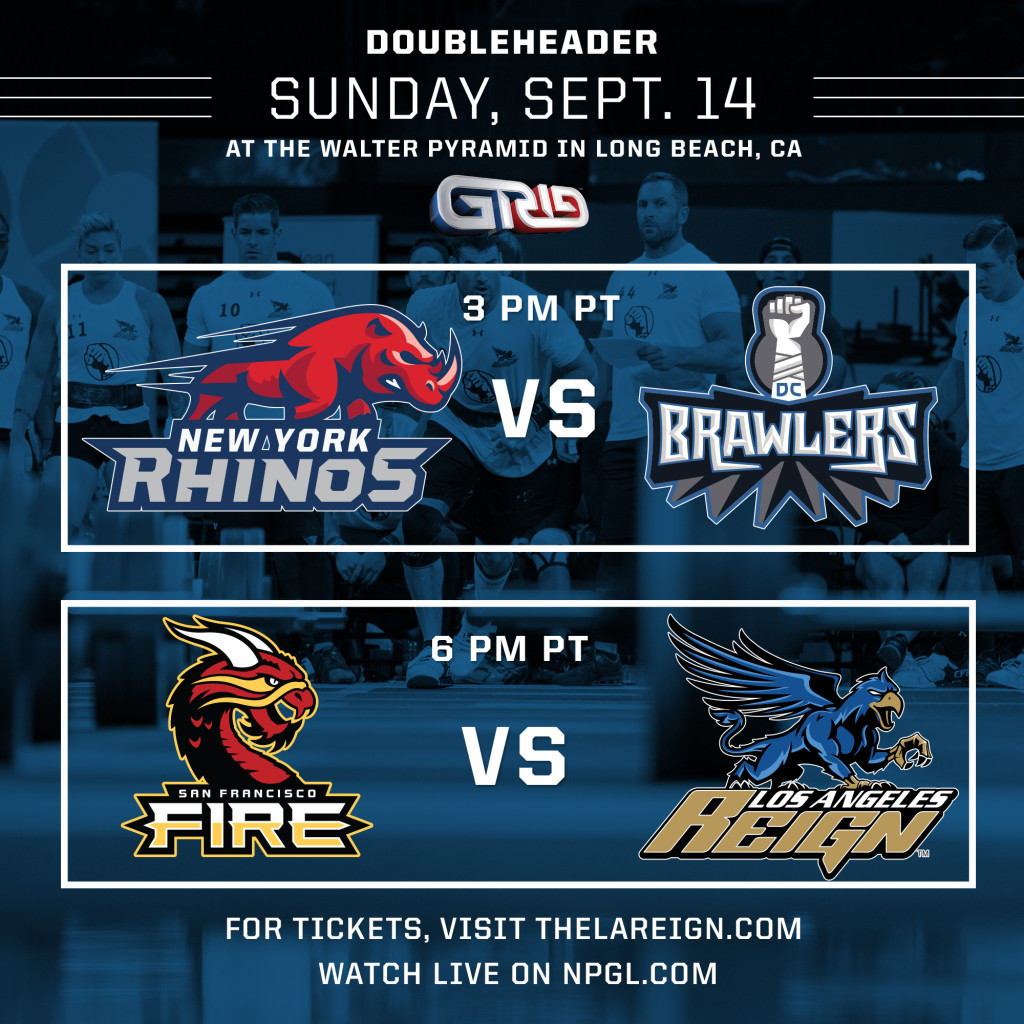